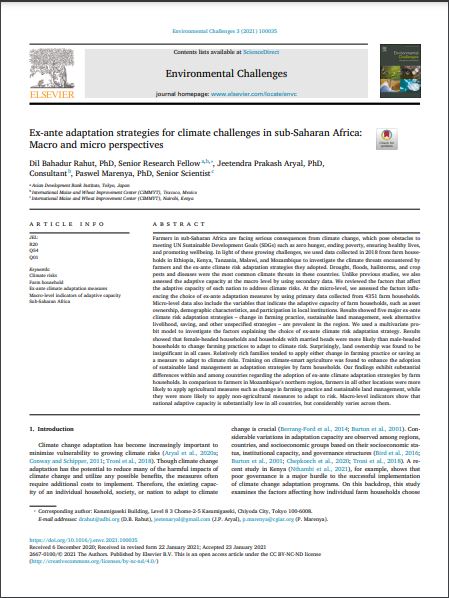 Farmers in sub-Saharan Africa are facing serious consequences from climate change, which pose obstacles to meeting UN Sustainable Development Goals (SDGs) such as zero hunger, ending poverty, ensuring healthy lives, and promoting wellbeing. In light of these growing challenges, we used data collected in 2018 from farm households in Ethiopia, Kenya, Tanzania, Malawi, and Mozambique to investigate the climate threats encountered by farmers and the ex-ante climate risk adaptation strategies they adopted. Drought, floods, hailstorms, and crop pests and diseases were the most common climate threats in these countries. Unlike previous studies, we also assessed the adaptive capacity at the macro level by using secondary data. We reviewed the factors that affect the adaptive capacity of each nation to address climate risks. At the micro-level, we assessed the factors influencing the choice of ex-ante adaptation measures by using primary data collected from 4351 farm households. Micro-level data also include the variables that indicate the adaptive capacity of farm households, such as asset ownership, demographic characteristics, and participation in local institutions. Results showed five major ex-ante climate risk adaptation strategies – change in farming practice, sustainable land management, seek alternative livelihood, saving, and other unspecified strategies – are prevalent in the region. We used a multivariate probit model to investigate the factors explaining the choice of ex-ante climate risk adaptation strategy. Results showed that female-headed households and households with married heads were more likely than male-headed households to change farming practices to adapt to climate risk. Surprisingly, land ownership was found to be insignificant in all cases. Relatively rich families tended to apply either change in farming practice or saving as a measure to adapt to climate risks. Training on climate-smart agriculture was found to enhance the adoption of sustainable land management as adaptation strategies by farm households. Our findings exhibit substantial differences within and among countries regarding the adoption of ex-ante climate adaptation strategies by farm households. In comparison to farmers in Mozambique’s northern region, farmers in all other locations were more likely to apply agricultural measures such as change in farming practice and sustainable land management, while they were more likely to apply non-agricultural measures to adapt to risk. Macro-level indicators show that national adaptive capacity is substantially low in all countries, but considerably varies across them.