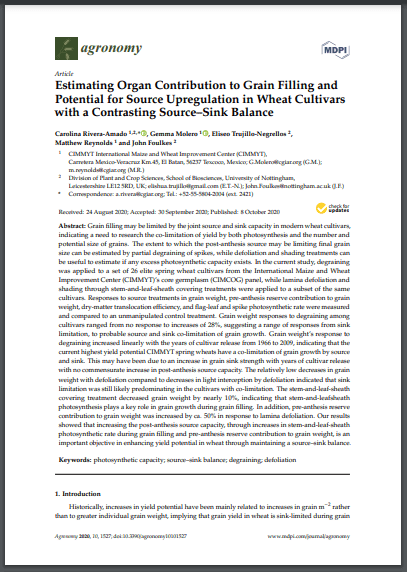 Grain filling may be limited by the joint source and sink capacity in modern wheat cultivars, indicating a need to research the co-limitation of yield by both photosynthesis and the number and potential size of grains. The extent to which the post-anthesis source may be limiting final grain size can be estimated by partial degraining of spikes, while defoliation and shading treatments can be useful to estimate if any excess photosynthetic capacity exists. In the current study, degraining was applied to a set of 26 elite spring wheat cultivars from the International Maize and Wheat Improvement Center (CIMMYT)’s core germplasm (CIMCOG) panel, while lamina defoliation and shading through stem-and-leaf-sheath covering treatments were applied to a subset of the same cultivars. Responses to source treatments in grain weight, pre-anthesis reserve contribution to grain weight, dry-matter translocation efficiency, and flag-leaf and spike photosynthetic rate were measured and compared to an unmanipulated control treatment. Grain weight responses to degraining among cultivars ranged from no response to increases of 28%, suggesting a range of responses from sink limitation, to probable source and sink co-limitation of grain growth. Grain weight’s response to degraining increased linearly with the years of cultivar release from 1966 to 2009, indicating that the current highest yield potential CIMMYT spring wheats have a co-limitation of grain growth by source and sink. This may have been due to an increase in grain sink strength with years of cultivar release with no commensurate increase in post-anthesis source capacity. The relatively low decreases in grain weight with defoliation compared to decreases in light interception by defoliation indicated that sink limitation was still likely predominating in the cultivars with co-limitation. The stem-and-leaf-sheath covering treatment decreased grain weight by nearly 10%, indicating that stem-and-leafsheath photosynthesis plays a key role in grain growth during grain filling. In addition, pre-anthesis reserve contribution to grain weight was increased by ca. 50% in response to lamina defoliation. Our results showed that increasing the post-anthesis source capacity, through increases in stem-and-leaf-sheath photosynthetic rate during grain filling and pre-anthesis reserve contribution to grain weight, is an important objective in enhancing yield potential in wheat through maintaining a source-sink balance.