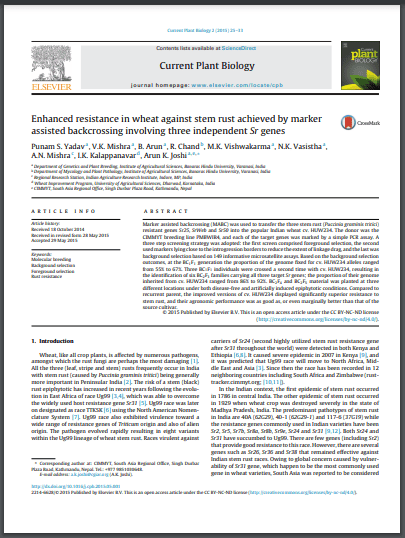 Marker assisted backcrossing (MABC) was used to transfer the three stem rust (Puccinia graminis tritici)resistant genes Sr25, SrWeb and Sr50 into the popular Indian wheat cv. HUW234. The donor was theCIMMYT breeding line PMBWIR4, and each of the target genes was marked by a simple PCR assay. Athree step screening strategy was adopted: the first screen comprised foreground selection, the secondused markers lying close to the introgression borders to reduce the extent of linkage drag, and the last wasbackground selection based on 149 informative microsatellite assays. Based on the background selectionoutcomes, at the BC1F1generation the proportion of the genome fixed for cv. HUW234 alleles rangedfrom 55% to 67%. Three BC1F1individuals were crossed a second time with cv. HUW234, resulting inthe identification of six BC2F3families carrying all three target Sr genes; the proportion of their genomeinherited from cv. HUW234 ranged from 86% to 92%. BC2F4and BC2F5material was planted at threedifferent locations under both disease-free and artificially induced epiphytotic conditions. Compared torecurrent parent, the improved versions of cv. HUW234 displayed significantly superior resistance tostem rust, and their agronomic performance was as good as, or even marginally better than that of thesource cultivar.