Effects of spatial resolution of terrain models on modelled discharge and soil loss in Oaxaca, Mexico 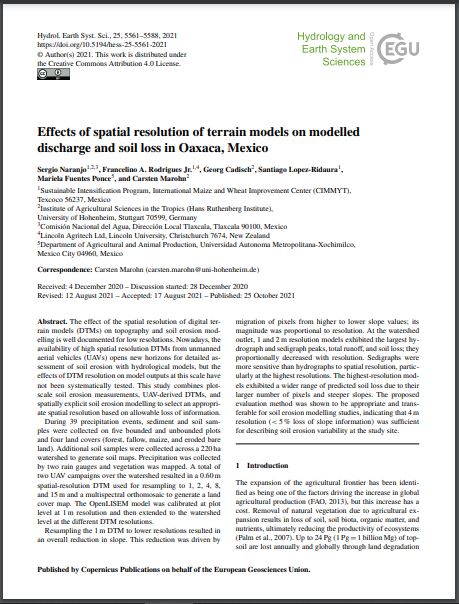 The effect of the spatial resolution of digital terrain models (DTMs) on topography and soil erosion modelling is well documented for low resolutions. Nowadays, the availability of high spatial resolution DTMs from unmanned aerial vehicles (UAVs) opens new horizons for detailed assessment of soil erosion with hydrological models, but the effects of DTM resolution on model outputs at this scale have not been systematically tested. This study combines plot-scale soil erosion measurements, UAV-derived DTMs, and spatially explicit soil erosion modelling to select an appropriate spatial resolution based on allowable loss of information. During 39 precipitation events, sediment and soil samples were collected on five bounded and unbounded plots and four land covers (forest, fallow, maize, and eroded bare land). Additional soil samples were collected across a 220ha watershed to generate soil maps. Precipitation was collected by two rain gauges and vegetation was mapped. A total of two UAV campaigns over the watershed resulted in a 0.60m spatial-resolution DTM used for resampling to 1, 2, 4, 8, and 15m and a multispectral orthomosaic to generate a land cover map. The OpenLISEM model was calibrated at plot level at 1m resolution and then extended to the watershed level at the different DTM resolutions. Resampling the 1m DTM to lower resolutions resulted in an overall reduction in slope. This reduction was driven by migration of pixels from higher to lower slope values; its magnitude was proportional to resolution. At the watershed outlet, 1 and 2m resolution models exhibited the largest hydrograph and sedigraph peaks, total runoff, and soil loss; they proportionally decreased with resolution. Sedigraphs were more sensitive than hydrographs to spatial resolution, particularly at the highest resolutions. The highest-resolution models exhibited a wider range of predicted soil loss due to their larger number of pixels and steeper slopes. The proposed evaluation method was shown to be appropriate and transferable for soil erosion modelling studies, indicating that 4m resolution (<5% loss of slope information) was sufficient for describing soil erosion variability at the study site.