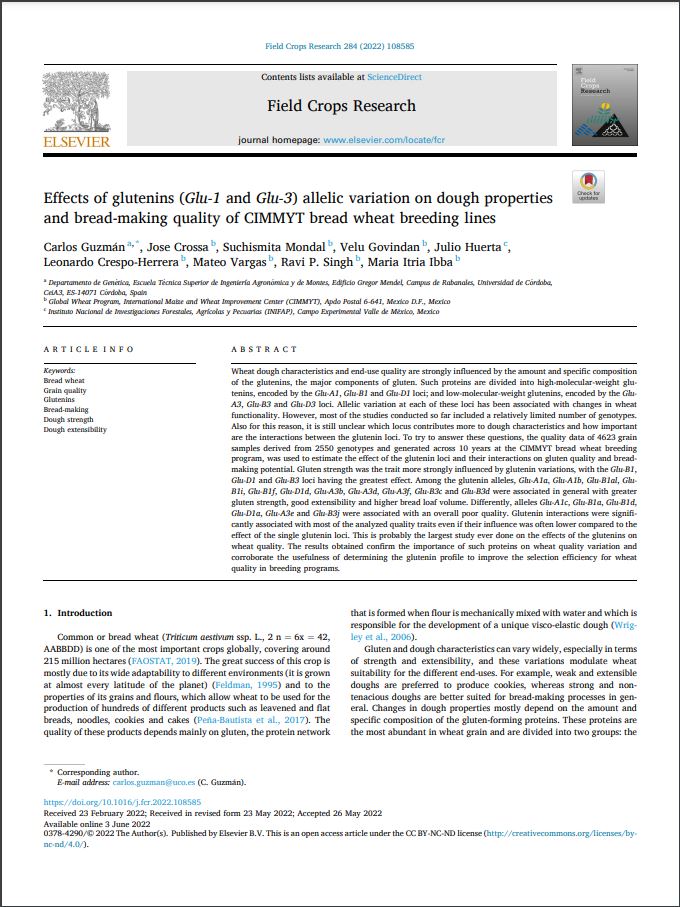 Wheat dough characteristics and end-use quality are strongly influenced by the amount and specific composition of the glutenins, the major components of gluten. Such proteins are divided into high-molecular-weight glutenins, encoded by the Glu-A1, Glu-B1 and Glu-D1 loci; and low-molecular-weight glutenins, encoded by the Glu-A3, Glu-B3 and Glu-D3 loci. Allelic variation at each of these loci has been associated with changes in wheat functionality. However, most of the studies conducted so far included a relatively limited number of genotypes. Also for this reason, it is still unclear which locus contributes more to dough characteristics and how important are the interactions between the glutenin loci. To try to answer these questions, the quality data of 4623 grain samples derived from 2550 genotypes and generated across 10 years at the CIMMYT bread wheat breeding program, was used to estimate the effect of the glutenin loci and their interactions on gluten quality and bread-making potential. Gluten strength was the trait more strongly influenced by glutenin variations, with the Glu-B1, Glu-D1 and Glu-B3 loci having the greatest effect. Among the glutenin alleles, Glu-A1a, Glu-A1b, Glu-B1al, Glu-B1i, Glu-B1f, Glu-D1d, Glu-A3b, Glu-A3d, Glu-A3f, Glu-B3c and Glu-B3d were associated in general with greater gluten strength, good extensibility and higher bread loaf volume. Differently, alleles Glu-A1c, Glu-B1a, Glu-B1d, Glu-D1a, Glu-A3e and Glu-B3j were associated with an overall poor quality. Glutenin interactions were significantly associated with most of the analyzed quality traits even if their influence was often lower compared to the effect of the single glutenin loci. This is probably the largest study ever done on the effects of the glutenins on wheat quality. The results obtained confirm the importance of such proteins on wheat quality variation and corroborate the usefulness of determining the glutenin profile to improve the selection efficiency for wheat quality in breeding programs.