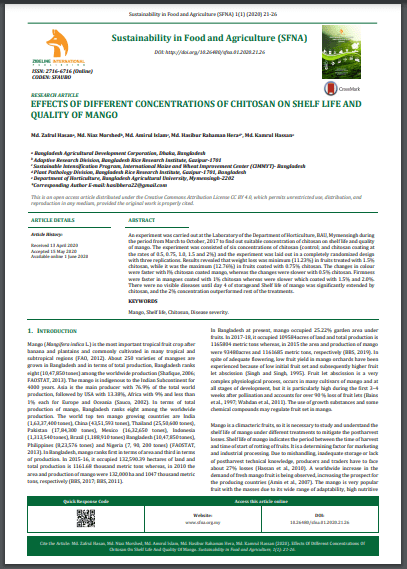 An experiment was carried out at the Laboratory of the Department of Horticulture, BAU, Mymensingh during the period from March to October, 2017 to find out suitable concentration of chitosan on shelf life and quality of mango. The experiment was consisted of six concentrations of chitosan (control; and chitosan coating at the rates of 0.5, 0.75, 1.0, 1.5 and 2%) and the experiment was laid out in a completely randomized design with three replications. Results revealed that weight loss was minimum (11.23%) in fruits treated with 1.5% chitosan, while it was the maximum (12.76%) in fruits coated with 0.75% chitosan. The changes in colour were faster with l% chitosan coated mango, whereas the changes were slower with 0.5% chitosan. Firmness were faster in mangoes coated with 1% chitosan whereas were slower which coated with 1.5% and 2.0%. There were no visible diseases until day 4 of storageand Shelf life of mango was significantly extended by chitosan, and the 2% concentration outperformed rest of the treatments.