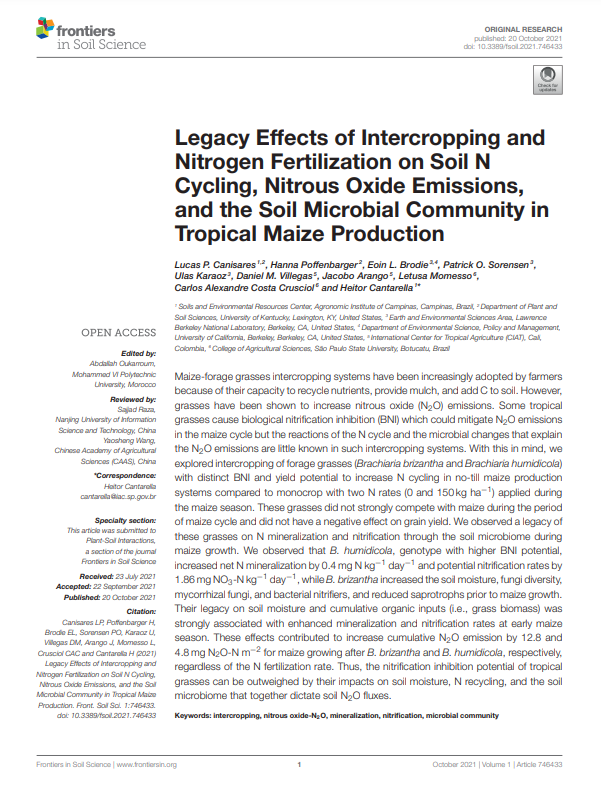 Maize-forage grasses intercropping systems have been increasingly adopted by farmers because of their capacity to recycle nutrients, provide mulch, and add C to soil. However, grasses have been shown to increase nitrous oxide (N2O) emissions. Some tropical grasses cause biological nitrification inhibition (BNI) which could mitigate N2O emissions in the maize cycle but the reactions of the N cycle and the microbial changes that explain the N2O emissions are little known in such intercropping systems. With this in mind, we explored intercropping of forage grasses (Brachiaria brizantha and Brachiaria humidicola) with distinct BNI and yield potential to increase N cycling in no-till maize production systems compared to monocrop with two N rates (0 and 150 kg ha−1) applied during the maize season. These grasses did not strongly compete with maize during the period of maize cycle and did not have a negative effect on grain yield. We observed a legacy of these grasses on N mineralization and nitrification through the soil microbiome during maize growth. We observed that B. humidicola, genotype with higher BNI potential, increased net N mineralization by 0.4 mg N kg−1 day−1 and potential nitrification rates by 1.86 mg NO3-N kg−1 day−1, while B. brizantha increased the soil moisture, fungi diversity, mycorrhizal fungi, and bacterial nitrifiers, and reduced saprotrophs prior to maize growth. Their legacy on soil moisture and cumulative organic inputs (i.e., grass biomass) was strongly associated with enhanced mineralization and nitrification rates at early maize season. These effects contributed to increase cumulative N2O emission by 12.8 and 4.8 mg N2O-N m−2 for maize growing after B. brizantha and B. humidicola, respectively, regardless of the N fertilization rate. Thus, the nitrification inhibition potential of tropical grasses can be outweighed by their impacts on soil moisture, N recycling, and the soil microbiome that together dictate soil N2O fluxes.