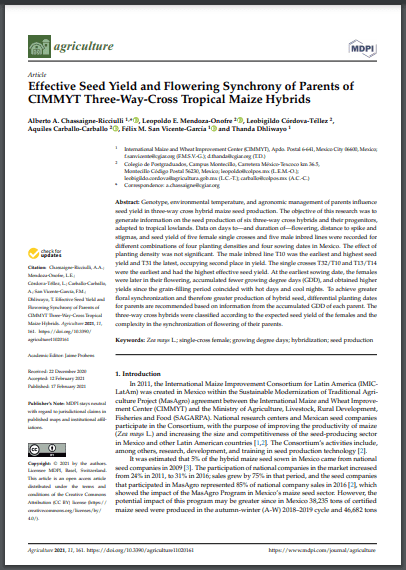 Genotype, environmental temperature, and agronomic management of parents influence seed yield in three-way cross hybrid maize seed production. The objective of this research was to generate information on the seed production of six three-way cross hybrids and their progenitors, adapted to tropical lowlands. Data on days to—and duration of—flowering, distance to spike and stigmas, and seed yield of five female single crosses and five male inbred lines were recorded for different combinations of four planting densities and four sowing dates in Mexico. The effect of planting density was not significant. The male inbred line T10 was the earliest and highest seed yield and T31 the latest, occupying second place in yield. The single crosses T32/T10 and T13/T14 were the earliest and had the highest effective seed yield. At the earliest sowing date, the females were later in their flowering, accumulated fewer growing degree days (GDD), and obtained higher yields since the grain-filling period coincided with hot days and cool nights. To achieve greater floral synchronization and therefore greater production of hybrid seed, differential planting dates for parents are recommended based on information from the accumulated GDD of each parent. The three-way cross hybrids were classified according to the expected seed yield of the females and the complexity in the synchronization of flowering of their parents.