Effect of maize processing methods on the retention of minerals, phytic acid and amino acids when using high kernel-zinc maize 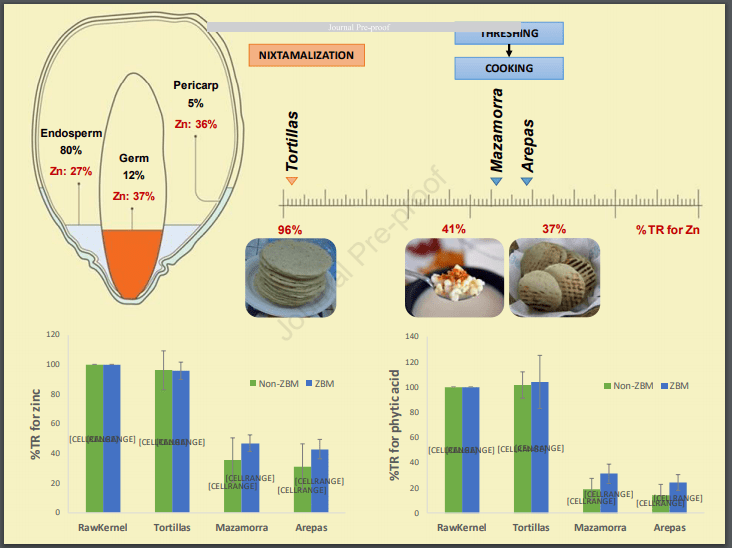 High kernel-zinc maize varieties are available to consumers in several countries in Latin America to contribute to increase the zinc intake of their populations. Minerals, phytic acid and amino acids retention were measured after processing six maize varieties including three high kernel-zinc, one quality protein maize and two conventional maize. Grain for each variety was processed in duplicate into tortillas, arepas and mazamorra, common maize dishes in the region. To evaluate the effect of processing kernel-zinc maize varieties on zinc retention, varieties were grouped in zinc biofortified maize (ZBM) and non-ZBM. Iron, zinc, phytic acid, tryptophan and lysine concentrations in non-processed maize were 17.1–19.1 μg/g DW, 23.9–33.0 μg/g DW, 9.9–10.0 mg/g DW, 0.06–0.08% and 0.27–0.37%, respectively. In tortillas, the iron, zinc, phytic acid and lysine content did not change (p<0.05) compared to raw grain, while tryptophan decreased by 32%. True retention of iron in arepas and mazamorra was 43.9 and 60.0%, for zinc 36.8 and 41.3%, and for phytic acid 19.3 and 25.1%. Tortillas had higher zinc retention than arepas and mazamorra due to use of whole grain in the nixtamalization process. Therefore, to contribute to higher zinc intake, nixtamalized tortilla prepared with biofortified zinc maize is recommended. Additionally, promotion of whole grain flour to prepare arepas should be explored to enhance the intake of minerals that are usually confined to aleurone layers and germ.