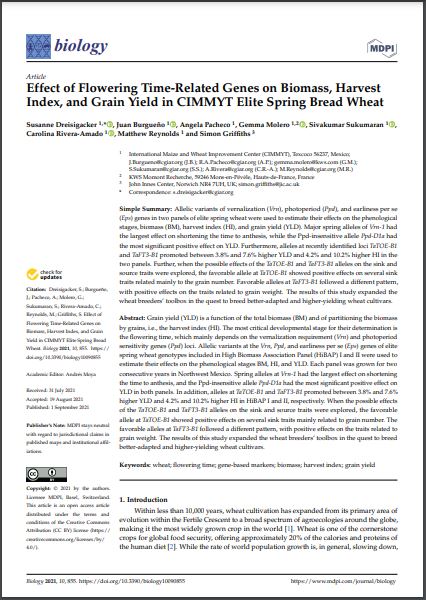 Grain yield (YLD) is a function of the total biomass (BM) and of partitioning the biomass by grains, i.e., the harvest index (HI). The most critical developmental stage for their determination is the flowering time, which mainly depends on the vernalization requirement (Vrn) and photoperiod sensitivity genes (Ppd) loci. Allelic variants at the Vrn, Ppd, and earliness per se (Eps) genes of elite spring wheat genotypes included in High Biomass Association Panel (HiBAP) I and II were used to estimate their effects on the phenological stages BM, HI, and YLD. Each panel was grown for two consecutive years in Northwest Mexico. Spring alleles at Vrn-1 had the largest effect on shortening the time to anthesis, and the Ppd-insensitive allele Ppd-D1a had the most significant positive effect on YLD in both panels. In addition, alleles at TaTOE-B1 and TaFT3-B1 promoted between 3.8% and 7.6% higher YLD and 4.2% and 10.2% higher HI in HiBAP I and II, respectively. When the possible effects of the TaTOE-B1 and TaFT3-B1 alleles on the sink and source traits were explored, the favorable allele at TaTOE-B1 showed positive effects on several sink traits mainly related to grain number. The favorable alleles at TaFT3-B1 followed a different pattern, with positive effects on the traits related to grain weight. The results of this study expanded the wheat breeders’ toolbox in the quest to breed better-adapted and higher-yielding wheat cultivars.