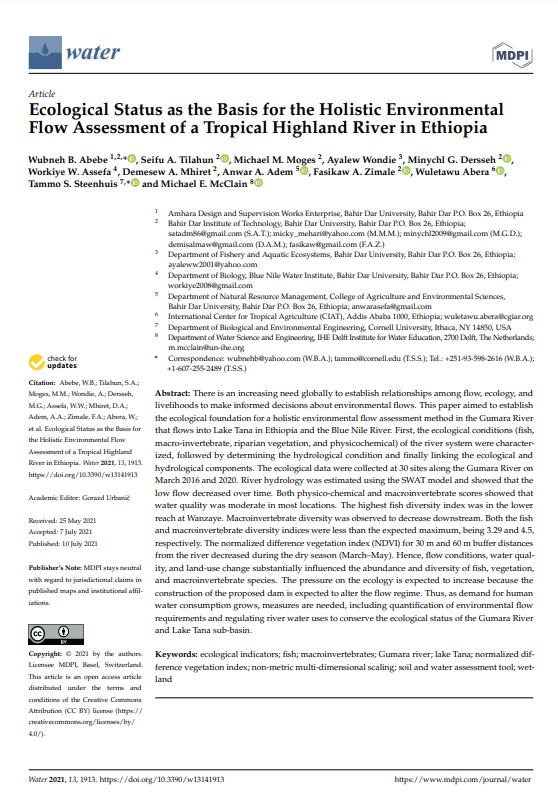 There is an increasing need globally to establish relationships among flow, ecology, and livelihoods to make informed decisions about environmental flows. This paper aimed to establish the ecological foundation for a holistic environmental flow assessment method in the Gumara River that flows into Lake Tana in Ethiopia and the Blue Nile River. First, the ecological conditions (fish, macro-invertebrate, riparian vegetation, and physicochemical) of the river system were characterized, followed by determining the hydrological condition and finally linking the ecological and hydrological components. The ecological data were collected at 30 sites along the Gumara River on March 2016 and 2020. River hydrology was estimated using the SWAT model and showed that the low flow decreased over time. Both physico-chemical and macroinvertebrate scores showed that water quality was moderate in most locations. The highest fish diversity index was in the lower reach at Wanzaye. Macroinvertebrate diversity was observed to decrease downstream. Both the fish and macroinvertebrate diversity indices were less than the expected maximum, being 3.29 and 4.5, respectively. The normalized difference vegetation index (NDVI) for 30 m and 60 m buffer distances from the river decreased during the dry season (March–May). Hence, flow conditions, water quality, and land-use change substantially influenced the abundance and diversity of fish, vegetation, and macroinvertebrate species. The pressure on the ecology is expected to increase because the construction of the proposed dam is expected to alter the flow regime. Thus, as demand for human water consumption grows, measures are needed, including quantification of environmental flow requirements and regulating river water uses to conserve the ecological status of the Gumara River and Lake Tana sub-basin.