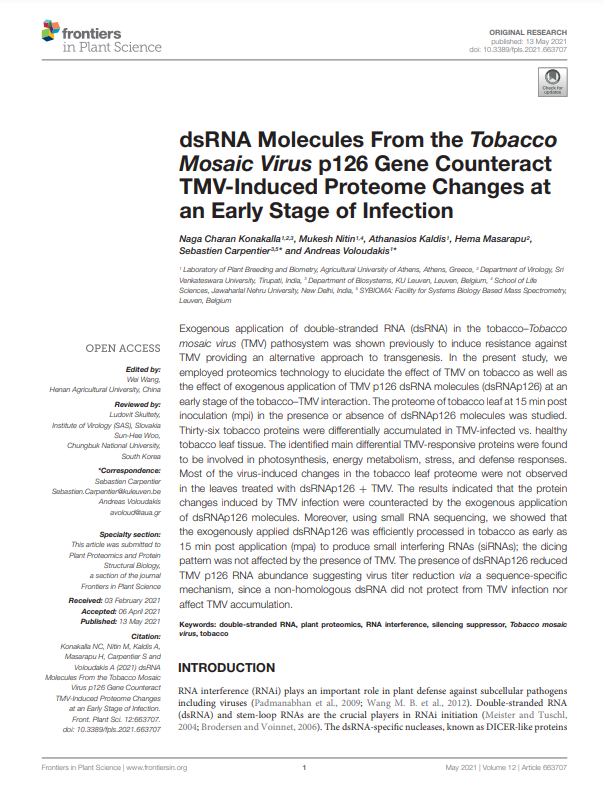 Exogenous application of double-stranded RNA (dsRNA) in the tobacco–Tobacco mosaic virus (TMV) pathosystem was shown previously to induce resistance against TMV providing an alternative approach to transgenesis. In the present study, we employed proteomics technology to elucidate the effect of TMV on tobacco as well as the effect of exogenous application of TMV p126 dsRNA molecules (dsRNAp126) at an early stage of the tobacco–TMV interaction.

The proteome of tobacco leaf at 15 min post inoculation (mpi) in the presence or absence of dsRNAp126 molecules was studied. Thirty-six tobacco proteins were differentially accumulated in TMV-infected vs. healthy tobacco leaf tissue. The identified main differential TMV-responsive proteins were found to be involved in photosynthesis, energy metabolism, stress, and defense responses. Most of the virus-induced changes in the tobacco leaf proteome were not observed in the leaves treated with dsRNAp126 + TMV. The results indicated that the protein changes induced by TMV infection were counteracted by the exogenous application of dsRNAp126 molecules. Moreover, using small RNA sequencing, we showed that the exogenously applied dsRNAp126 was efficiently processed in tobacco as early as 15 min post application (mpa) to produce small interfering RNAs (siRNAs); the dicing pattern was not affected by the presence of TMV. The presence of dsRNAp126 reduced TMV p126 RNA abundance suggesting virus titer reduction via a sequence-specific mechanism, since a non-homologous dsRNA did not protect from TMV infection nor affect TMV accumulation.