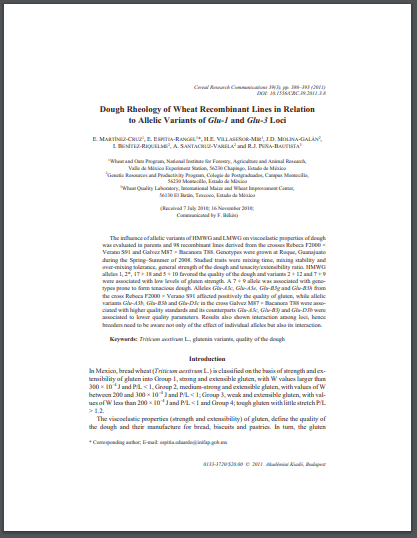 The influence of allelic variants of HMW Gand LMWG on viscoelastic properties of dough was evaluated in parents and 98 recombinant lines derived from the crosses Rebeca F2000 × Verano S91 and Galvez M87 × Bacanora T88. Genotypes were grown at Roque, Guanajuato during the Spring-Summer of 2008. Studied traits were mixing time, mixing stability and over-mixing tolerance, general strength of the dough and tenacity/extensibility ratio. HMWG alleles 1, 2*, 17 + 18 and 5 + 10 favored the quality of the dough and variants 2 + 12 and 7 + 9 were associated with low levels of gluten strength. A 7 + 9 allele was associated with genotypes prone to form tenacious dough. Alleles Glu-A3c, Glu-A3e, Glu-B3g and Glu-B3h from the cross Rebeca F2000 × Verano S91 affected positively the quality of gluten, while allelic variants Glu-A3b, Glu-B3h and Glu-D3c in the cross Galvez M87 × Bacanora T88 were associated with higher quality standards and its counterparts Glu-A3c, Glu-B3j and Glu-D3b were associated to lower quality parameters. Results also shown interaction among loci, hence breeders need to be aware not only of the effect of individual alleles but also its interaction.