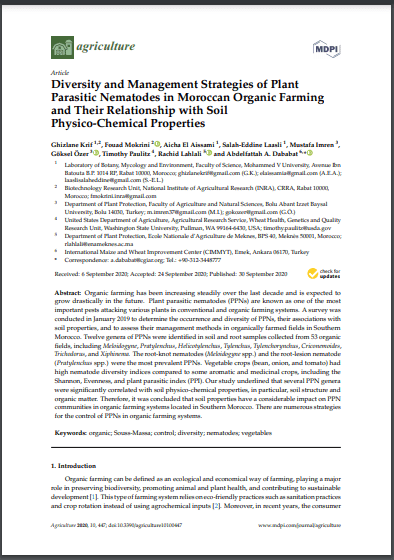 Organic farming has been increasing steadily over the last decade and is expected to grow drastically in the future. Plant parasitic nematodes (PPNs) are known as one of the most important pests attacking various plants in conventional and organic farming systems. A survey was conducted in January 2019 to determine the occurrence and diversity of PPNs, their associations with soil properties, and to assess their management methods in organically farmed fields in Southern Morocco. Twelve genera of PPNs were identified in soil and root samples collected from 53 organic fields, including Meloidogyne, Pratylenchus, Helicotylenchus, Tylenchus, Tylenchorynchus, Criconemoides, Trichodorus, and Xiphinema. The root-knot nematodes (Meloidogyne spp.) and the root-lesion nematode (Pratylenchus spp.) were the most prevalent PPNs. Vegetable crops (bean, onion, and tomato) had high nematode diversity indices compared to some aromatic and medicinal crops, including the Shannon, Evenness, and plant parasitic index (PPI). Our study underlined that several PPN genera were significantly correlated with soil physico-chemical properties, in particular, soil structure and organic matter. Therefore, it was concluded that soil properties have a considerable impact on PPN communities in organic farming systems located in Southern Morocco. There are numerous strategies for the control of PPNs in organic farming systems.