Diversity and identification of plant-parasitic nematodes in wheat-growing ecosystems 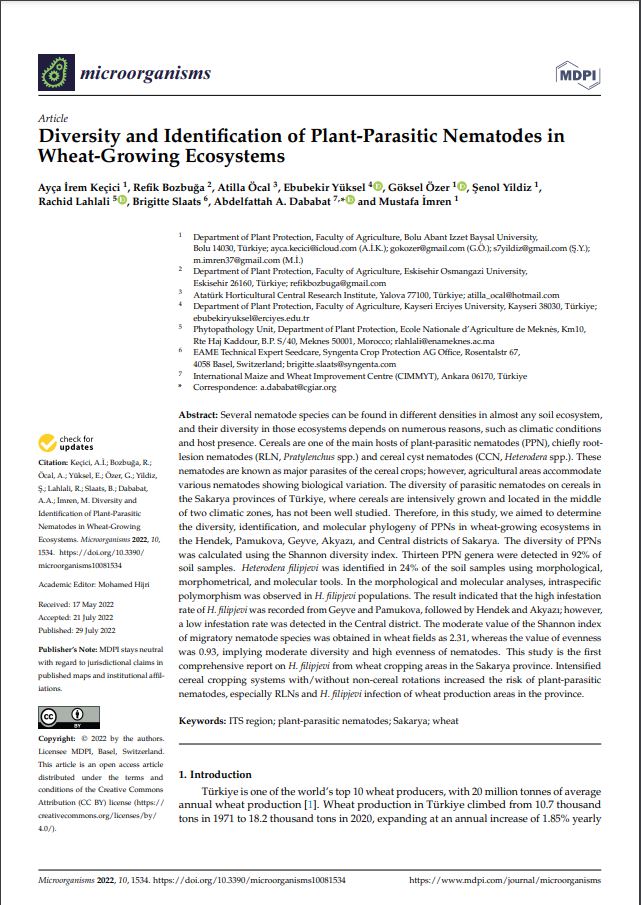 Several nematode species can be found in different densities in almost any soil ecosystem, and their diversity in those ecosystems depends on numerous reasons, such as climatic conditions and host presence. Cereals are one of the main hosts of plant-parasitic nematodes (PPN), chiefly root-lesion nematodes (RLN, Pratylenchus spp.) and cereal cyst nematodes (CCN, Heterodera spp.). These nematodes are known as major parasites of the cereal crops; however, agricultural areas accommodate various nematodes showing biological variation. The diversity of parasitic nematodes on cereals in the Sakarya provinces of Türkiye, where cereals are intensively grown and located in the middle of two climatic zones, has not been well studied. Therefore, in this study, we aimed to determine the diversity, identification, and molecular phylogeny of PPNs in wheat-growing ecosystems in the Hendek, Pamukova, Geyve, Akyazı, and Central districts of Sakarya. The diversity of PPNs was calculated using the Shannon diversity index. Thirteen PPN genera were detected in 92% of soil samples. Heterodera filipjevi was identified in 24% of the soil samples using morphological, morphometrical, and molecular tools. In the morphological and molecular analyses, intraspecific polymorphism was observed in H. filipjevi populations. The result indicated that the high infestation rate of H. filipjevi was recorded from Geyve and Pamukova, followed by Hendek and Akyazı; however, a low infestation rate was detected in the Central district. The moderate value of the Shannon index of migratory nematode species was obtained in wheat fields as 2.31, whereas the value of evenness was 0.93, implying moderate diversity and high evenness of nematodes. This study is the first comprehensive report on H. filipjevi from wheat cropping areas in the Sakarya province. Intensified cereal cropping systems with/without non-cereal rotations increased the risk of plant-parasitic nematodes, especially RLNs and H. filipjevi infection of wheat production areas in the province.