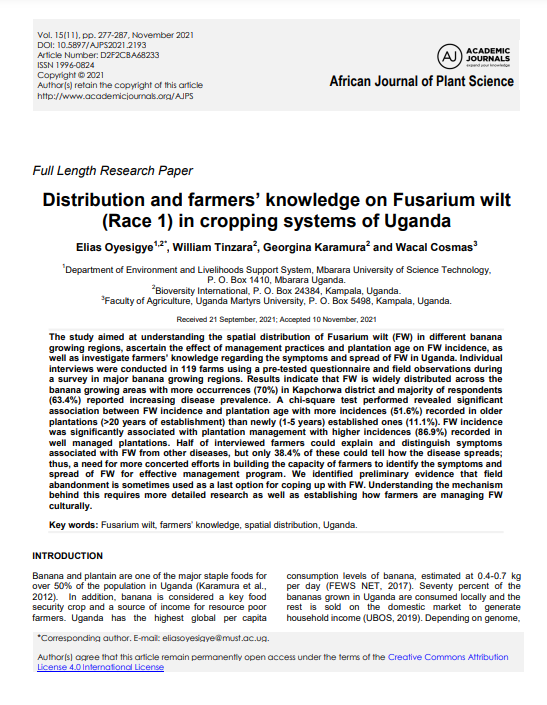 The study aimed at understanding the spatial distribution of Fusarium wilt (FW) in different banana growing regions, ascertain the effect of management practices and plantation age on FW incidence, as well as investigate farmers’ knowledge regarding the symptoms and spread of FW in Uganda. Individual interviews were conducted in 119 farms using a pre-tested questionnaire and field observations during a survey in major banana growing regions. Results indicate that FW is widely distributed across the banana growing areas with more occurrences (70%) in Kapchorwa district and majority of respondents (63.4%) reported increasing disease prevalence.

A chi-square test performed revealed significant association between FW incidence and plantation age with more incidences (51.6%) recorded in older plantations (>20 years of establishment) than newly (1-5 years) established ones (11.1%). FW incidence was significantly associated with plantation management with higher incidences (86.9%) recorded in well managed plantations. Half of interviewed farmers could explain and distinguish symptoms associated with FW from other diseases, but only 38.4% of these could tell how the disease spreads; thus, a need for more concerted efforts in building the capacity of farmers to identify the symptoms and spread of FW for effective management program. We identified preliminary evidence that field abandonment is sometimes used as a last option for coping up with FW. Understanding the mechanism behind this requires more detailed research as well as establishing how farmers are managing FW culturally.