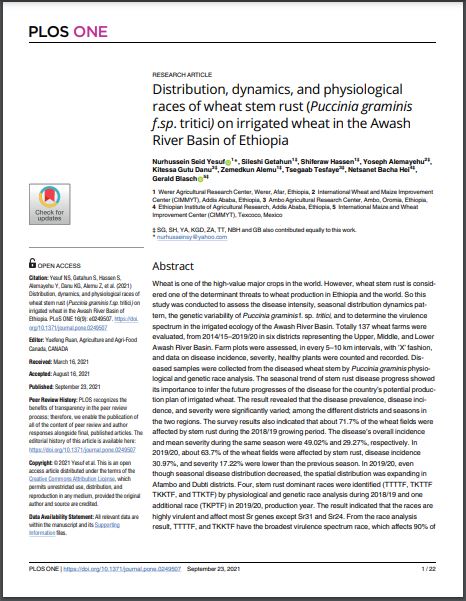 Wheat is one of the high-value major crops in the world. However, wheat stem rust is considered one of the determinant threats to wheat production in Ethiopia and the world. So this study was conducted to assess the disease intensity, seasonal distribution dynamics pattern, the genetic variability of Puccinia graminis f. sp. tritici, and to determine the virulence spectrum in the irrigated ecology of the Awash River Basin. Totally 137 wheat farms were evaluated, from 2014/15–2019/20 in six districts representing the Upper, Middle, and Lower Awash River Basin. Farm plots were assessed, in every 5–10 km intervals, with ’X’ fashion, and data on disease incidence, severity, healthy plants were counted and recorded. Diseased samples were collected from the diseased wheat stem by Puccinia graminis physiological and genetic race analysis. The seasonal trend of stem rust disease progress showed its importance to infer the future progresses of the disease for the country’s potential production plan of irrigated wheat. The result revealed that the disease prevalence, disease incidence, and severity were significantly varied; among the different districts and seasons in the two regions. The survey results also indicated that about 71.7% of the wheat fields were affected by stem rust during the 2018/19 growing period. The disease’s overall incidence and mean severity during the same season were 49.02% and 29.27%, respectively. In 2019/20, about 63.7% of the wheat fields were affected by stem rust, disease incidence 30.97%, and severity 17.22% were lower than the previous season. In 2019/20, even though seasonal disease distribution decreased, the spatial distribution was expanding in Afambo and Dubti districts. Four, stem rust dominant races were identified (TTTTF, TKTTF TKKTF, and TTKTF) by physiological and genetic race analysis during 2018/19 and one additional race (TKPTF) in 2019/20, production year. The result indicated that the races are highly virulent and affect most Sr genes except Sr31 and Sr24. From the race analysis result, TTTTF, and TKKTF have the broadest virulence spectrum race, which affects 90% of the Sr genes. Generally, we can conclude that the spatial and seasonal distribution of the disease is expanding. Most of the races in the irrigated areas in the Basin were similar to that of rain-fed wheat production belts in Ethiopia, so care must be given, to effective management of the diseases, in both production ecologies towards controlling the spore pressure than race variability. Therefore, these findings provide inputs for wheat producers to reduce the spread and disease’ damage in the irrigated ecologies of Ethiopia. Also, it gives an insight for breeders to think about the breeding program in their crossing lines.