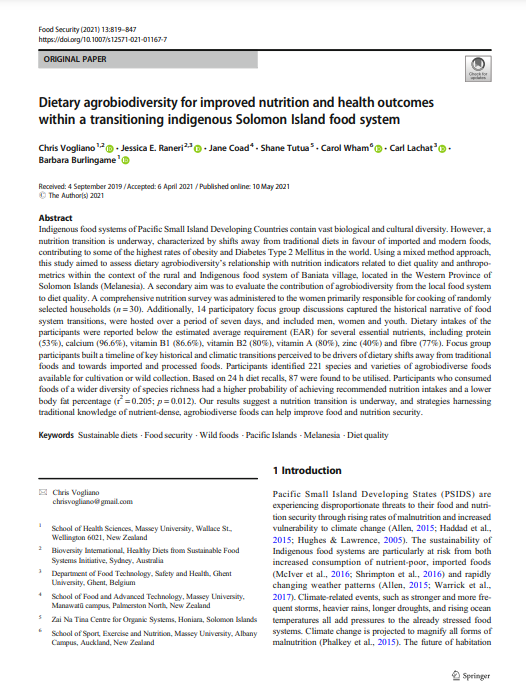 Indigenous food systems of Pacific Small Island Developing Countries contain vast biological and cultural diversity. However, a nutrition transition is underway, characterized by shifts away from traditional diets in favour of imported and modern foods, contributing to some of the highest rates of obesity and Diabetes Type 2 Mellitus in the world. Using a mixed method approach, this study aimed to assess dietary agrobiodiversity’s relationship with nutrition indicators related to diet quality and anthropometrics within the context of the rural and Indigenous food system of Baniata village, located in the Western Province of Solomon Islands (Melanesia). A secondary aim was to evaluate the contribution of agrobiodiversity from the local food system to diet quality. A comprehensive nutrition survey was administered to the women primarily responsible for cooking of randomly selected households (n = 30).

Additionally, 14 participatory focus group discussions captured the historical narrative of food system transitions, were hosted over a period of seven days, and included men, women and youth. Dietary intakes of the participants were reported below the estimated average requirement (EAR) for several essential nutrients, including protein (53%), calcium (96.6%), vitamin B1 (86.6%), vitamin B2 (80%), vitamin A (80%), zinc (40%) and fibre (77%). Focus group participants built a timeline of key historical and climatic transitions perceived to be drivers of dietary shifts away from traditional foods and towards imported and processed foods. Participants identified 221 species and varieties of agrobiodiverse foods available for cultivation or wild collection. Based on 24 h diet recalls, 87 were found to be utilised. Participants who consumed foods of a wider diversity of species richness had a higher probability of achieving recommended nutrition intakes and a lower body fat percentage (r2 = 0.205; p = 0.012). Our results suggest a nutrition transition is underway, and strategies harnessing traditional knowledge of nutrient-dense, agrobiodiverse foods can help improve food and nutrition security.