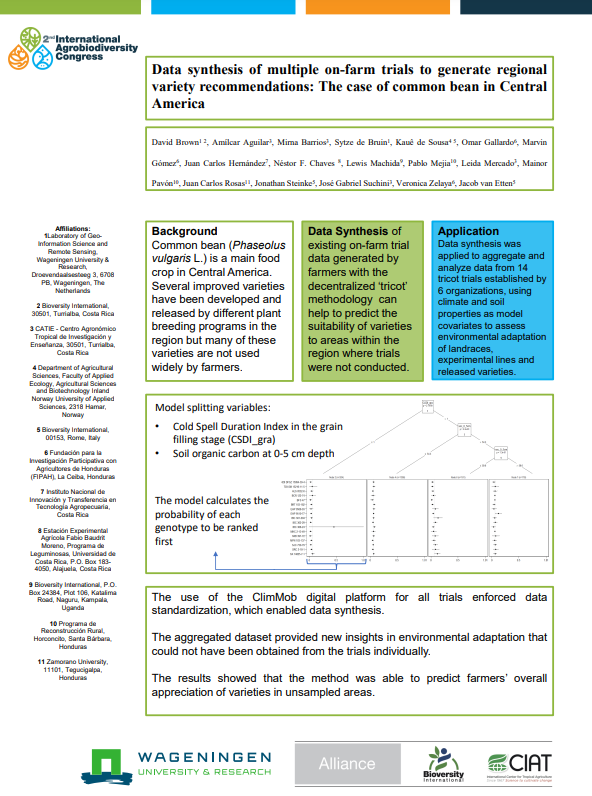 Common bean (Phaseolus vulgaris L.) is a main food crop in Central America. Several improved varieties have been developed and released by different crop improvement programs in the region but many of these varieties are not used widely by farmers. One limitation is the lack of information about which are the best adapted varieties for each area within the region, even though on-farm testing of varieties is widely done by different organizations. Data synthesis of existing on-farm trial data can help to predict the suitability of varieties to areas within the region where trials were not conducted. Data synthesis is facilitated by a new participatory on-farm testing approach, triadic comparison of technologies (tricot). This approach involves the participation of farmers as citizen scientists at scale and ensures data are collected digitally, facilitating data synthesis. From 2015 to 2018, more than 2,000 tricot trial plots were established in Central America by different organizations, including agricultural research centers, universities, NGOs, and farmer’s associations. The trials tested landraces, experimental lines, and improved varieties created with both conventional and participatory breeding approaches. We applied an innovative data synthesis method to analyze the tricot trial data jointly, including seasonal climate and soil covariates to assess environmental adaptation. The results showed that the method was able to predict farmers’ overall appreciation of varieties in unsampled areas.