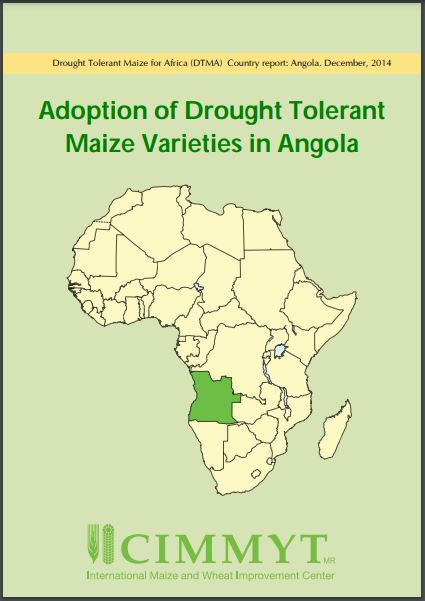 Angola has an economy heavily dominated by crude oil export. On the other hand agriculture, which is dominated by smallholder farming, directly contributes only 6-10% of Angola’s gross domestic product (GDP). However, it is estimated that 70% of the country’s population is involved in agricultural activities. This makes the agricultural sector very important as it supports livelihood of the majority of the population. Among the many crops grown by smallholder farmers in Angola, maize is the most important agricultural commodity although production often falls below requirements due to various factors, of which erratic and below normal rains recorded across much of the country stand out as the most important factors. The adoption of drought tolerant (DT) maize varieties is one opportunity currently available for the farmers to avoid the potential threats of the erratic rains and frequent dry spell during the rain season. Under severe drought stress, drought tolerant hybrids have a 40% yield advantage compared to commercially available hybrids in farmers’ fields. These new DT varieties possess genes that can reduce yield loss during the flowering and grain-filling periods under drought conditions. They are also tolerant to low-Nitrogen helping farmers reduce the instability of maize yields. This study provides information on maize production in six provinces of Angola, including improved maize varieties grown, preferred traits by farmer households, and factors that can enhance adoption of improved DT maize varieties. The mean total farm size was about 2.4 hectares per household. Sample households in Kwanza Norte, Lunda Norte and Malange provinces own farm sizes less than the sample average and hence allocate less than 0.50 hectares of land to maize. About 32.3% of the sample households applied fertilizer on their plots for crop production. Only 14.2% of the sample households reported to have access to irrigation. Both management practices are less used in “Planalto de Malange” provinces. The maize grain yield harvested in 2011/12 agricultural season was comparable to that in 2012/13. The average grain yield harvested per household in 2011/12 and 2012/13 seasons was 405 kg and 420 kg, respectively. About 65% of households did not have enough maize from the 2011/12 harvest season. On average, each household runs short of maize for the household for two months. Adoption and use of improved maize varieties was found to be very low (13.8%) in the study areas. About 38% of the sample households reported to have been using recycled seed. The inquiry about the exposure to drought revealed that 93% of the sample households reported to have experienced drought twice or less over the last 10 years. Local maize varieties are the most commonly planted in the study areas. Hybrids maize varieties are known only by farm households of Bié, Huambo and Kwanza Sul provinces. Recycled seeds are the main source of maize varieties followed by local market purchased varieties. Only 33% of households received information on new maize varieties from various sources mainly in Bié, Huambo and Kwanza Sul. Government extension services were reported as nearly the sole information source in “Palnalto de Malange” provinces. Key factors that positively influenced adoption of new improved hybrid maize varieties included age of the head of household, literacy level of the head of household, members of household engaged in agricultural activities, total maize area planted and frequence of drought experienced . Whereas number of household members engaged in agricultural activities and drought experience have positive influence on intensity of adoption of improved maize varieties. 35% of the sample households indicated that they were aware of DT maize varieties. No farm household reported awareness of DT maize in Kwanza Norte, Lunda Norte and Malange. Farmers consider some of the varieties they are growing as drought tolerant. 5.3% of 72 farmers reported that they were first exposed to DT maize in 1963. DT maize varieties currently being grown in the study areas are Catete, Branco Redondo, Amarelo, Vermelho, ZM521 and SAM3. DT maize varieties grown in Bié province were Vermelho (14.1%), ZM521 (7.1%), SAM3 (5.9%) and Amarelo (5.2%). DT maize varieties identified in Huambo were Vermelho (12.5%), Branco Redondo (6.3%) and Amarelo (6.3%). Those identified in Kwanza Sul were Catete (25.9%), Amarelo (8.6%) and Branco Redondo (3.4%). Early maturity (43% households) was the most frequently mentioned characteristic of drought tolerant maize as perceived by farmers followed by ability to tolerate dry spells. Farm households learned about DT maize varieties mainly through self experience (57%), from fellow farmers (33%), and government extension services (32%). Lack of access to seed (92.5%, n=600) mainly in Planalto de Malange was mentioned as the key reason for not trying to grow DT maize varieties. Other reasons mentioned were high levels of fertilizer required to grow the maize and the expected low yield as perceived by farmers. Interestingly, despite this lack of awareness, all sample households were willing to try DT maize varieties. The results from a linear regression showed that as the number of exposures to drought over the last 10 years increases, households with more income were less willing to pay for OPV DT maize varieties. Farmers in Bié and Huambo provinces are less willing to pay for OPV DT maize seeds compared to Kwanza Sul. This is contrary to farmers in Kwanza Norte, Lunda Norte and Malange who solely depend on government extension services.