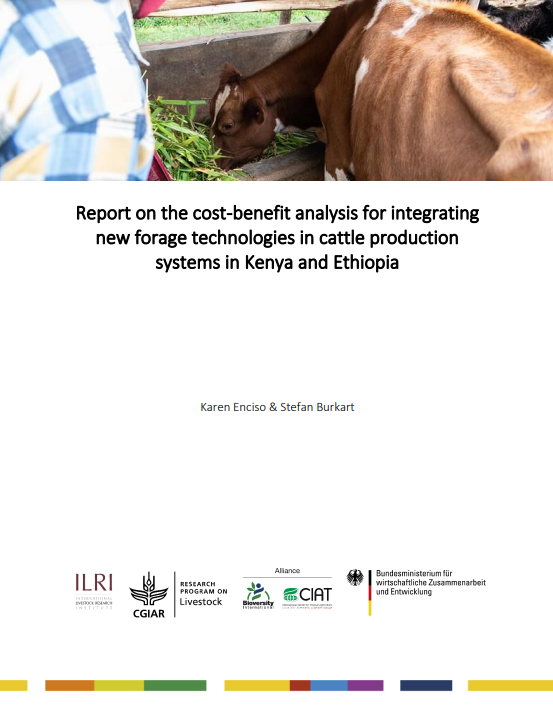 This report presents the results of an economic evaluation of establishing new forage alternatives in cattle systems in Kenya and Ethiopia. In Kenya, we evaluated the inclusion (intervention scenario IN) of the grasses Panicum maximum cv. Maasai and Brachiaria hybrid cv. Mulato II, and in Ethiopia, Bachiaria hybrid cv. Mulato II and Brachiaria mutica. The evaluated forages are presented as alternatives to the traditionally used technologies based on their improved biomass availability during dry season, better biomass quality and general quantity, and their resistance to pests and diseases. The results of the economic evaluation were contrasted with the traditional technologies used by the producers in each country (base scenario or farmer practice scenario FP). The analysis makes use of data at a technical level collected in the field over five weeks in 2020, where milk production was measured on 18 farms in three counties in western Kenya (Bungoma, Busia, Kakamega) and on 17 farms in three districts (woredas) in northern Ethiopia (Damot Gale, Damot Woyde and Soddo Zuria). The analysis made use of a discounted free cash flow model, the estimation of financial indicators and a sensitivity analysis of the results and considered a typical farm as unit of analysis for each country.

On the one hand, for Ethiopia, the results indicate that the integration of the new technologies would improve daily cow milk production by 11% and reduce the calving interval by 30%, and thus, improve the amount of milk produced per year as well as the gross income from milk sales by 60% each. The results indicate that the investment in the establishment of the suggested grasses under the IN scenario is profitable, with an average Net Present Value (NPV) of US$ 1,586 and an Internal Rate of Return (IRR) of 29%. The performed risk analysis suggests that the possibility of obtaining economic losses reduces from 97.4% in the basic scenario (FP) to 16.2% in the intervention scenario (IN). On the other hand, in Kenya, the introduction of new forage alternatives (IN) would increase milk production by up to 9.5% and reduce the calving interval by around 15% compared to the basic scenario (FP). This leads to an increase in the amount of milk produced of more than four times. However, the economic and financial indicators are negative for both scenarios in Kenya. This is associated with the high labor and feeding and supplementation costs, resulting in elevated total production costs.