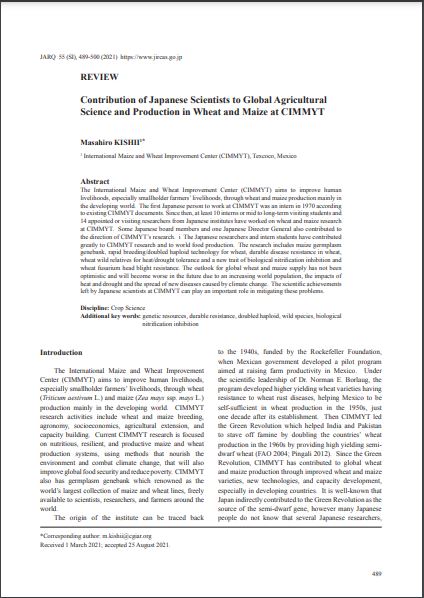 The International Maize and Wheat Improvement Center (CIMMYT) aims to improve human livelihoods, especially smallholder farmers’ livelihoods, through wheat and maize production mainly in the developing world. The first Japanese person to work at CIMMYT was an intern in 1970 according to existing CIMMYT documents. Since then, at least 10 interns or mid to long-term visiting students and 14 appointed or visiting researchers from Japanese institutes have worked on wheat and maize research at CIMMYT. Some Japanese board members and one Japanese Director General also contributed to the direction of CIMMYT’s research. i The Japanese researchers and intern students have contributed greatly to CIMMYT research and to world food production. The research includes maize germplasm genebank, rapid breeding/doubled haploid technology for wheat, durable disease resistance in wheat, wheat wild relatives for heat/drought tolerance and a new trait of biological nitrification inhibition and wheat fusarium head blight resistance. The outlook for global wheat and maize supply has not been optimistic and will become worse in the future due to an increasing world population, the impacts of heat and drought and the spread of new diseases caused by climate change. The scientific achievements left by Japanese scientists at CIMMYT can play an important role in mitigating these problems.