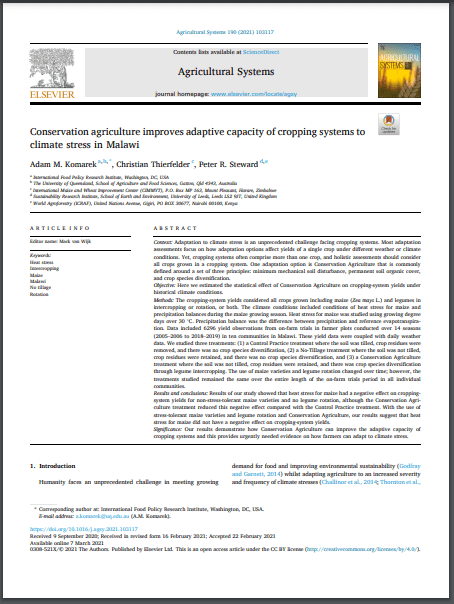 Context: Adaptation to climate stress is an unprecedented challenge facing cropping systems. Most adaptation assessments focus on how adaptation options affect yields of a single crop under different weather or climate conditions. Yet, cropping systems often comprise more than one crop, and holistic assessments should consider all crops grown in a cropping system. One adaptation option is Conservation Agriculture that is commonly defined around a set of three principles: minimum mechanical soil disturbance, permanent soil organic cover, and crop species diversification. Objective: Here we estimated the statistical effect of Conservation Agriculture on cropping-system yields under historical climate conditions. Methods: The cropping-system yields considered all crops grown including maize (Zea mays L.) and legumes in intercropping or rotation, or both. The climate conditions included conditions of heat stress for maize and precipitation balances during the maize growing season. Heat stress for maize was studied using growing degree days over 30 °C. Precipitation balance was the difference between precipitation and reference evapotranspiration. Data included 6296 yield observations from on-farm trials in farmer plots conducted over 14 seasons (2005–2006 to 2018–2019) in ten communities in Malawi. These yield data were coupled with daily weather data. We studied three treatments: (1) a Control Practice treatment where the soil was tilled, crop residues were removed, and there was no crop species diversification, (2) a No-Tillage treatment where the soil was not tilled, crop residues were retained, and there was no crop species diversification, and (3) a Conservation Agriculture treatment where the soil was not tilled, crop residues were retained, and there was crop species diversification through legume intercropping. The use of maize varieties and legume rotation changed over time; however, the treatments studied remained the same over the entire length of the on-farm trials period in all individual communities. Results and conclusions: Results of our study showed that heat stress for maize had a negative effect on cropping-system yields for non-stress-tolerant maize varieties and no legume rotation, although the Conservation Agriculture treatment reduced this negative effect compared with the Control Practice treatment. With the use of stress-tolerant maize varieties and legume rotation and Conservation Agriculture, our results suggest that heat stress for maize did not have a negative effect on cropping-system yields. Significance: Our results demonstrate how Conservation Agriculture can improve the adaptive capacity of cropping systems and this provides urgently needed evidence on how farmers can adapt to climate stress.