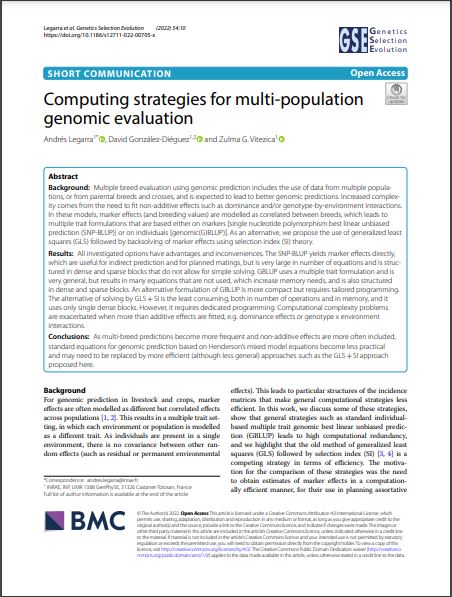 BACKGROUND: Multiple breed evaluation using genomic prediction includes the use of data from multiple populations, or from parental breeds and crosses, and is expected to lead to better genomic predictions. Increased complexity comes from the need to fit non-additive effects such as dominance and/or genotype-by-environment interactions. In these models, marker effects (and breeding values) are modelled as correlated between breeds, which leads to multiple trait formulations that are based either on markers [single nucleotide polymorphism best linear unbiased prediction (SNP-BLUP)] or on individuals [genomic(G)BLUP)]. As an alternative, we propose the use of generalized least squares (GLS) followed by backsolving of marker effects using selection index (SI) theory. RESULTS: All investigated options have advantages and inconveniences. The SNP-BLUP yields marker effects directly, which are useful for indirect prediction and for planned matings, but is very large in number of equations and is structured in dense and sparse blocks that do not allow for simple solving. GBLUP uses a multiple trait formulation and is very general, but results in many equations that are not used, which increase memory needs, and is also structured in dense and sparse blocks. An alternative formulation of GBLUP is more compact but requires tailored programming. The alternative of solving by GLS + SI is the least consuming, both in number of operations and in memory, and it uses only single dense blocks. However, it requires dedicated programming. Computational complexity problems are exacerbated when more than additive effects are fitted, e.g. dominance effects or genotype x environment interactions. CONCLUSIONS: As multi-breed predictions become more frequent and non-additive effects are more often included, standard equations for genomic prediction based on Henderson’s mixed model equations become less practical and may need to be replaced by more efficient (although less general) approaches such as the GLS + SI approach proposed here.