Commodity crops in biodiversity-rich production landscapes: Friends or foes? The example of cotton in the Mid Zambezi Valley, Zimbabwe 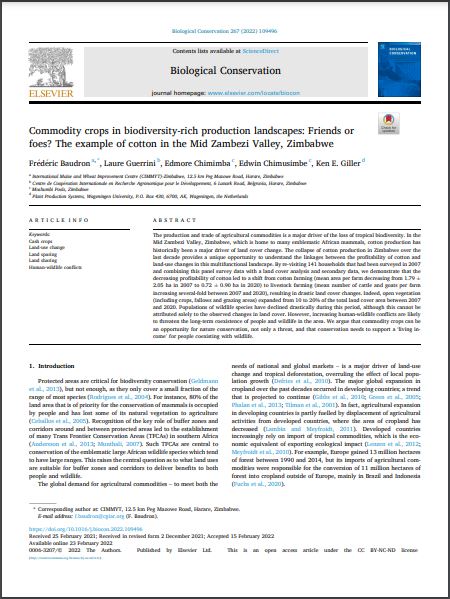 The production and trade of agricultural commodities is a major driver of the loss of tropical biodiversity. In the Mid Zambezi Valley, Zimbabwe, which is home to many emblematic African mammals, cotton production has historically been a major driver of land cover change. The collapse of cotton production in Zimbabwe over the last decade provides a unique opportunity to understand the linkages between the profitability of cotton and land-use changes in this multifunctional landscape. By re-visiting 141 households that had been surveyed in 2007 and combining this panel survey data with a land cover analysis and secondary data, we demonstrate that the decreasing profitability of cotton led to a shift from cotton farming (mean area per farm decreasing from 1.79 ± 2.05 ha in 2007 to 0.72 ± 0.90 ha in 2020) to livestock farming (mean number of cattle and goats per farm increasing several-fold between 2007 and 2020), resulting in drastic land cover changes. Indeed, open vegetation (including crops, fallows and grazing areas) expanded from 10 to 20% of the total land cover area between 2007 and 2020. Populations of wildlife species have declined drastically during this period, although this cannot be attributed solely to the observed changes in land cover. However, increasing human-wildlife conflicts are likely to threaten the long-term coexistence of people and wildlife in the area. We argue that commodity crops can be an opportunity for nature conservation, not only a threat, and that conservation needs to support a ‘living income’ for people coexisting with wildlife.