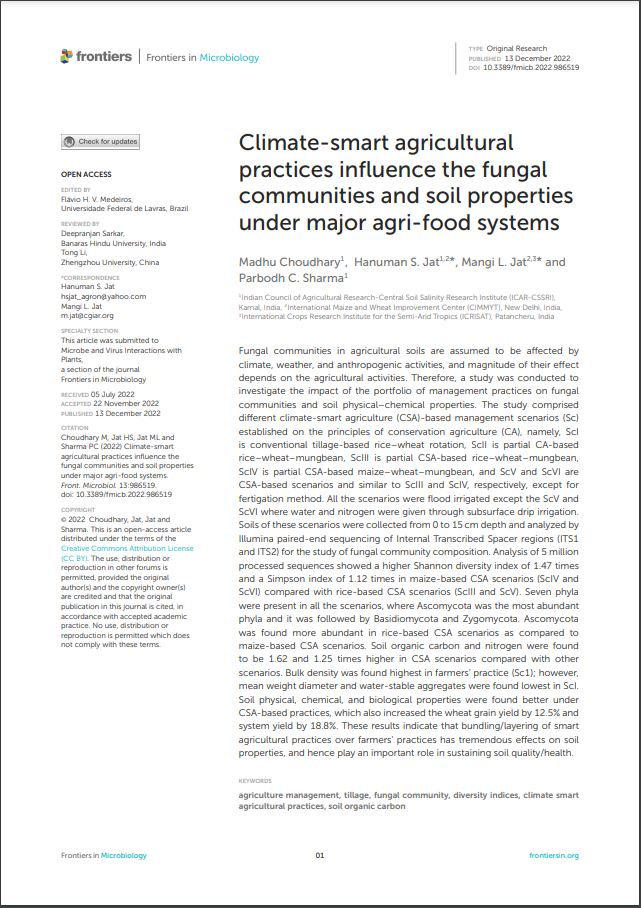 Fungal communities in agricultural soils are assumed to be affected by climate, weather, and anthropogenic activities, and magnitude of their effect depends on the agricultural activities. Therefore, a study was conducted to investigate the impact of the portfolio of management practices on fungal communities and soil physical–chemical properties. The study comprised different climate-smart agriculture (CSA)-based management scenarios (Sc) established on the principles of conservation agriculture (CA), namely, ScI is conventional tillage-based rice–wheat rotation, ScII is partial CA-based rice–wheat–mungbean, ScIII is partial CSA-based rice–wheat–mungbean, ScIV is partial CSA-based maize–wheat–mungbean, and ScV and ScVI are CSA-based scenarios and similar to ScIII and ScIV, respectively, except for fertigation method. All the scenarios were flood irrigated except the ScV and ScVI where water and nitrogen were given through subsurface drip irrigation. Soils of these scenarios were collected from 0 to 15 cm depth and analyzed by Illumina paired-end sequencing of Internal Transcribed Spacer regions (ITS1 and ITS2) for the study of fungal community composition. Analysis of 5 million processed sequences showed a higher Shannon diversity index of 1.47 times and a Simpson index of 1.12 times in maize-based CSA scenarios (ScIV and ScVI) compared with rice-based CSA scenarios (ScIII and ScV). Seven phyla were present in all the scenarios, where Ascomycota was the most abundant phyla and it was followed by Basidiomycota and Zygomycota. Ascomycota was found more abundant in rice-based CSA scenarios as compared to maize-based CSA scenarios. Soil organic carbon and nitrogen were found to be 1.62 and 1.25 times higher in CSA scenarios compared with other scenarios. Bulk density was found highest in farmers’ practice (Sc1); however, mean weight diameter and water-stable aggregates were found lowest in ScI. Soil physical, chemical, and biological properties were found better under CSA-based practices, which also increased the wheat grain yield by 12.5% and system yield by 18.8%. These results indicate that bundling/layering of smart agricultural practices over farmers’ practices has tremendous effects on soil properties, and hence play an important role in sustaining soil quality/health.