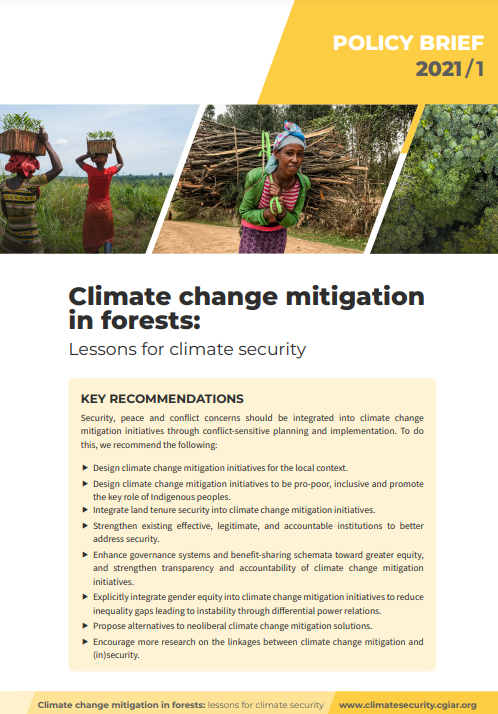 Forests in low and middle-income countries are at the centre of climate change mitigation efforts. But these forests are also areas of high levels of insecurity and are found in fragile states with weak governance, especially over forestlands. Nations affected by conflict hold 40 per cent of the world’s tropical forests (Donovan et al. 2007). No fewer than 25 of 64 countries with REDD+ initiatives are experiencing or emerging from armed conflict (Castro-Nuñez et al. 2017; UN-REDD 2017). The debate about ‘climate security’ has focussed on the way climate change can exacerbate threats and dangers, but less attention has been placed on the security issues associated with the responses to climate change such as mitigation. Climate change mitigation initiatives can have a significant impact on peace, conflict and security by reinforcing existing inequalities or influencing new forms of forest governance and relations among forest actors. When CCMis contribute to peacebuilding through improved land tenure security for marginalized and Indigenous peoples, enhanced livelihoods opportunities, equitable benefit distribution, and fair processes for governance and conflict resolution, CCMIs can play a constructive force in stabilising security contexts. However, when these dynamics are lacking, they can destabilise forest areas and lead to escalated conflict and insecurity.