Embedding circularity into the transition towards sustainable agroforestry systems in Peru 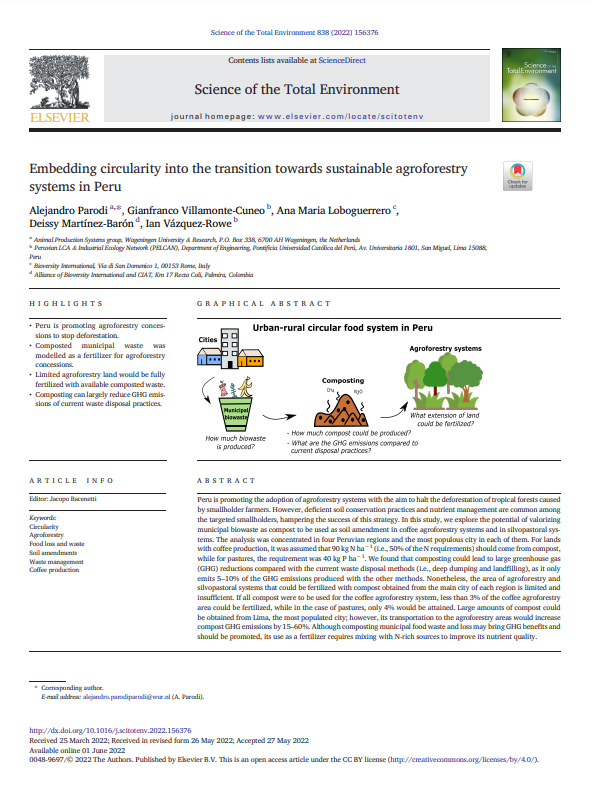 Peru is promoting the adoption of agroforestry systems with the aim to halt the deforestation of tropical forests caused by smallholder farmers. However, deficient soil conservation practices and nutrient management are common among the targeted smallholders, hampering the success of this strategy. In this study, we explore the potential of valorizing municipal biowaste as compost to be used as soil amendment in coffee agroforestry systems and in silvopastoral systems. The analysis was concentrated in four Peruvian regions and the most populous city in each of them. For lands with coffee production, it was assumed that 90 kg N ha−1 (i.e., 50% of the N requirements) should come from compost, while for pastures, the requirement was 40 kg P ha−1. We found that composting could lead to large greenhouse gas (GHG) reductions compared with the current waste disposal methods (i.e., deep dumping and landfilling), as it only emits 5–10% of the GHG emissions produced with the other methods. Nonetheless, the area of agroforestry and silvopastoral systems that could be fertilized with compost obtained from the main city of each region is limited and insufficient. If all compost were to be used for the coffee agroforestry system, less than 3% of the coffee agroforestry area could be fertilized, while in the case of pastures, only 4% would be attained. Large amounts of compost could be obtained from Lima, the most populated city; however, its transportation to the agroforestry areas would increase compost GHG emissions by 15–60%. Although composting municipal food waste and loss may bring GHG benefits and should be promoted, its use as a fertilizer requires mixing with N-rich sources to improve its nutrient quality.