Characterization of Mediterranean durum wheat for resistance to Pyrenophora tritici-repentis 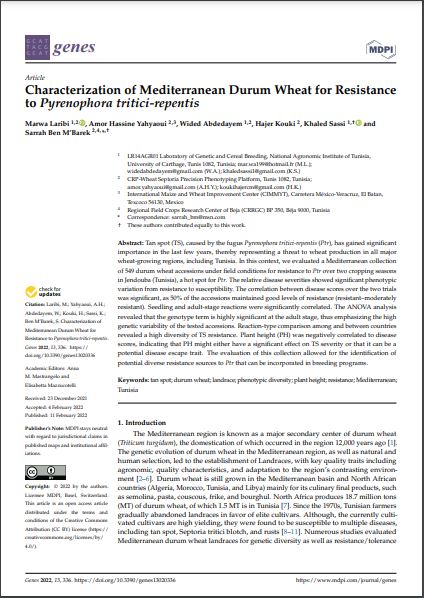 Tan spot (TS), caused by the fugus Pyrenophora tritici-repentis (Ptr), has gained significant importance in the last few years, thereby representing a threat to wheat production in all major wheat-growing regions, including Tunisia. In this context, we evaluated a Mediterranean collection of 549 durum wheat accessions under field conditions for resistance to Ptr over two cropping seasons in Jendouba (Tunisia), a hot spot for Ptr. The relative disease severities showed significant phenotypic variation from resistance to susceptibility. The correlation between disease scores over the two trials was significant, as 50% of the accessions maintained good levels of resistance (resistant–moderately resistant). Seedling-and adult-stage reactions were significantly correlated. The ANOVA analysis revealed that the genotype term is highly significant at the adult stage, thus emphasizing the high genetic variability of the tested accessions. Reaction-type comparison among and between countries revealed a high diversity of TS resistance. Plant height (PH) was negatively correlated to disease scores, indicating that PH might either have a significant effect on TS severity or that it can be potential disease escape traits. The evaluation of this collection allowed for the identification of potential diverse resistance sources to Ptr that can be incorporated in breeding programs.