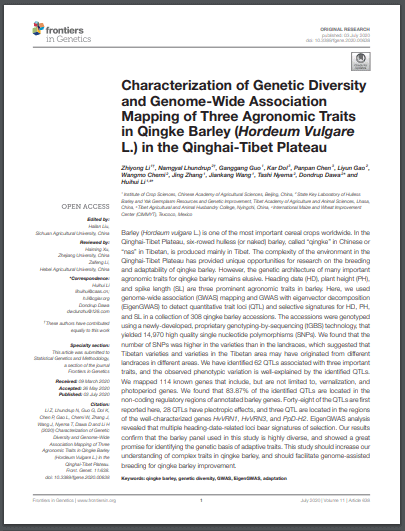 Barley (Hordeum vulgare L.) is one of the most important cereal crops worldwide. In the Qinghai-Tibet Plateau, six-rowed hulless (or naked) barley, called “qingke” in Chinese or “nas” in Tibetan, is produced mainly in Tibet. The complexity of the environment in the Qinghai-Tibet Plateau has provided unique opportunities for research on the breeding and adaptability of qingke barley. However, the genetic architecture of many important agronomic traits for qingke barley remains elusive. Heading date (HD), plant height (PH), and spike length (SL) are three prominent agronomic traits in barley. Here, we used genome-wide association (GWAS) mapping and GWAS with eigenvector decomposition (EigenGWAS) to detect quantitative trait loci (QTL) and selective signatures for HD, PH, and SL in a collection of 308 qingke barley accessions. The accessions were genotyped using a newly-developed, proprietary genotyping-by-sequencing (tGBS) technology, that yielded 14,970 high quality single nucleotide polymorphisms (SNPs). We found that the number of SNPs was higher in the varieties than in the landraces, which suggested that Tibetan varieties and varieties in the Tibetan area may have originated from different landraces in different areas. We have identified 62 QTLs associated with three important traits, and the observed phenotypic variation is well-explained by the identified QTLs. We mapped 114 known genes that include, but are not limited to, vernalization, and photoperiod genes. We found that 83.87% of the identified QTLs are located in the non-coding regulatory regions of annotated barley genes. Forty-eight of the QTLs are first reported here, 28 QTLs have pleotropic effects, and three QTL are located in the regions of the well-characterized genes HvVRN1, HvVRN3, and PpD-H2. EigenGWAS analysis revealed that multiple heading-date-related loci bear signatures of selection. Our results confirm that the barley panel used in this study is highly diverse, and showed a great promise for identifying the genetic basis of adaptive traits. This study should increase our understanding of complex traits in qingke barley, and should facilitate genome-assisted breeding for qingke barley improvement.