Chapter 7. Fast-tracking the development and dissemination of a drought-tolerant maize variety in Ethiopia in response to the risks of climate change 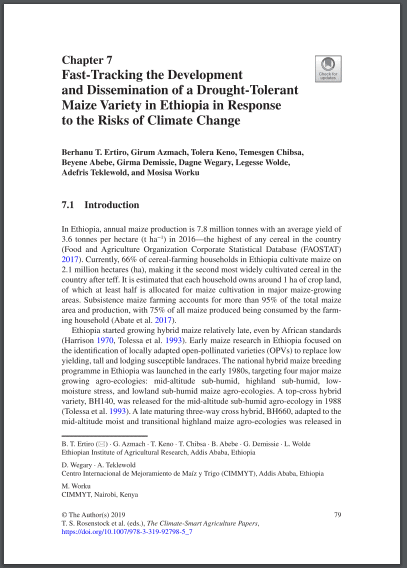 Climate change projections suggest increased frequency of drought in many parts of sub-Saharan Africa (SSA). The replacement of old varieties of maize with new drought-tolerant (DT) varieties will be crucial to respond to the future risk of drought, as it already is today. The first group of locally developed maize hybrids in Ethiopia—BH140, BH660 and BH540—were commercialised between 1988 and 1995, but were not selected for drought tolerance. Among these, BH660 remained the most popular and widely grown maize variety in the Ethiopian maize belt between 2000 and 2010, accounting for nearly 50% of maize area under improved seed. A new DT hybrid, BH661, with better agronomic performances under optimum and random drought than BH660, was identified and released in 2011. In 2016, 9000 tonnes of certified seed—enough to plant 360,000 ha—was produced and marketed. The concerted effort of breeders and seed producers as well as governmental and non-governmental extension workers drove the development, release and rapid adoption of BH661 contributing to food and income security of more than 300,000 households by mitigating the effects of climate change in Ethiopia. The success of BH661 is a valuable and timely case study for breeders, seed companies, extension agents, regulatory bodies and policy-makers striving to develop and disseminate new DT varieties in sub-Saharan Africa.