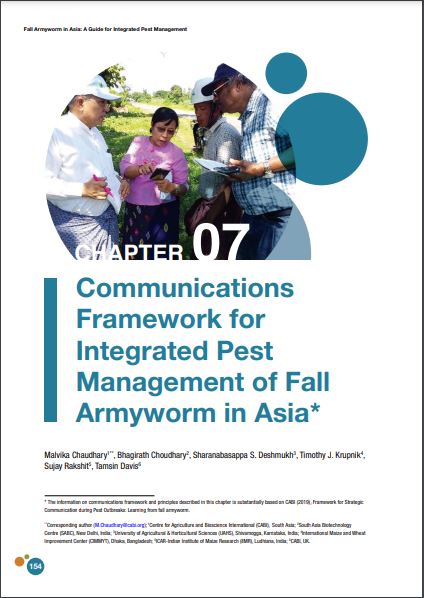 Early May 2018 in Karnataka, India, researchers under the jurisdiction of the University of Agricultural and Horticultural Sciences, Shivamogga (UAHSS), encountered an exotic pest feeding in the maize fields. Identified as Spodoptera frugiperda (FAW) by the UAHSS, followed by the University of Agricultural Sciences, Bangalore (UASB) and the Indian Council of Agricultural Research–National Bureau of Agricultural Insect Resources (ICAR-NBAIR), the pest was reported in India/Asia for the first time (Sharanabasappa et al. 2018). Soon thereafter the FAW adult moths were reported in various states across India. Shortly after this, reports of FAW began to emerge in Sri Lanka, Bangladesh, Myanmar, and a number of countries in South and South East Asia (see Chapter 1). In response, and in some cases as pre-emptive action, both public and private agencies rallied to provide the necessary support to maize farmers to mitigate the damage to the maize crop. Because FAW was formally reported in West Africa in 2016 (Goergen et al. 2016) and subsequently reported throughout Africa soon thereafter, the arrival of FAW in Asia was not surprising; several of the Asian nations were prepared for the outbreak (BOX 1). The successful control of FAW in the Americas for over 100 years, combined with experiences from Africa, meant that appropriate control options and recommendations were already available (see Chapter 3). FAW, with its voracious appetite, would have had devastating effects on food production if the knowledge of how to control FAW from the Americas had not been deployed in various pest management, extension, and communication strategies. Communications to create enhanced awareness on FAW among the farming communities— its identification, behavior, signs of damage, and appropriate and rational management strategies at the farm, national, and regional levels—became the need of the hour. In particular, it was necessary to provide information to smallholder farmers, whose knowledge of the pest was very limited. Several countries in Asia have addressed the threat posed by FAW through communications and sharing of cross-sectoral knowledge developed with the assistance of stakeholders, including representatives from the government, international organizations, the private sector, and non-governmental organizations (NGOs) (e.g., BOX 2).