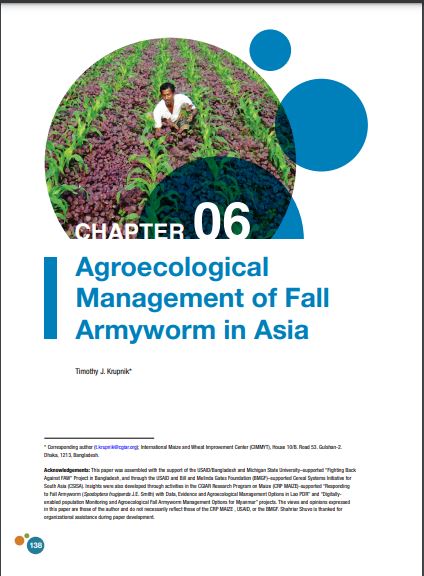 Following its discovery in Africa in 2016 and the significant impact that it had across Africa (Day et al. 2017), the 2018 arrival of fall armyworm (FAW; Spodoptera frugiperda J.E. Smith) in Southern India raised alarm of the risk for crop losses across Asia (Sun et al. 2021; ASEAN 2020). Farming systems and cropping patterns are, however, considerably different in Asia than in Africa. These differences are likely to have implications for the ways in which FAW interacts with the crops grown by farmers and the intensity and extent of pest damage that results. Some of the largest generalizable differences between the two continents include the predominance of rice (Oryza sativa) as a staple crop that is usually grown at least once a year in Asia as a result of the region’s monomodal monsoon rain pattern. Maize, which is the introduced FAW biotype’s preferred host crop (see Chapter 1), can be grown throughout the year in different parts of Asia, and is often (but not always) rotated with rice. Maize is predominantly grown during the monsoon season in South Asia. In the farming systems of the Indo-Gangetic Plains (IGP) that span India, Nepal, Pakistan, and Bangladesh, maize is also increasingly grown using irrigation in the winter season following the summer rice crop (Timsina et al. 2011), although in parts of the IGP where monsoonseason rainfall is not excessive and soils are well drained, maize can also be grown in the summer. Across the Himalayan foothills and in the more mountainous environments of South East Asia, maize is grown as a primary crop during the monsoon season after the onset of sufficient rainfall (Gerpachio and Pingali 2007). Much of the maize produced in the Himalayas is open-pollinated, subsistence oriented, and lowinput, while the hybrid maize cultivated in South Asia tends to be grown with more inputs as a cash crop sold to the animal feed industry (Timsina et al. 2011). In South East Asia’s mountainous areas, maize is also commonly included in slash-and-burn farming systems that replace primary forests (Mertz et al. 2009). Irrigated or flood-retreat maize is also grown as a cash crop in Asia’s riverine deltas. The ways in which FAW interacts with maize and the rich diversity of cultivated and uncultivated species in Asia’s agroecosystems is the subject of this chapter. Agroecology is a scientific discipline and approach to farm and cropping systems design that encourages the purposeful use of biological diversity and ecological interactions among species and their environment (Nicholls and Altieri 2016; Pretty 2003). Manipulation of the factors influencing biodiversity and ecological processes are prioritized to support productive, resource-conserving, and resilient farm management practices that minimize negative environmental and socioeconomic impacts (Altieri 1999). With a focus on providing practical and actionable advice for extension services, and following a review of invasive species biology as it pertains to FAW, this chapter focuses on the applicability of agroecological methods to manage FAW in Asia’s diverse farming systems.