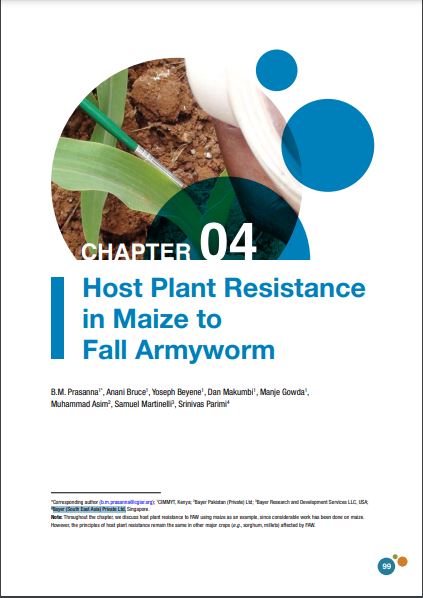 Host plant resistance, in the context of resistance to insect pests, was originally defined as “the collective heritable characteristics by which a plant species may reduce the probability of successful utilization of that plant as a host by an insect species” (Beck 1965). It is indeed a central component of the integrated pest management (IPM) strategy to control the fall armyworm (FAW) (Prasanna et al. 2018), and comprises: • Native genetic resistance: Identifying/developing germplasm with resistance to an insect pest; and • Transgenic resistance: Using a gene (or genes) from an external source(s) (other than the recipient plant species) to make the host plant resistant to an insect pest. FAW-tolerant/resistant varieties, whether derived through native genetic resistance or through a transgenic approach, provide a practical and economical way to minimize crop losses due to the pest. Improved maize varieties with genetic resistance to FAW will effectively complement other IPM interventions (Riggin et al. 1992, 1994). Seed-based technologies such as host plant resistance are not only easily disseminated and readily adopted by farmers due to their visible benefits, but will also require far fewer applications of pesticides than FAW-susceptible varieties, thus saving smallholder farmers resources (financial and labor), while mitigating negative environmental impact.