Chapter 3. The need for integrated management of the cereal cyst nematodes, Heterodera spp. in Central Western Asia and North Africa 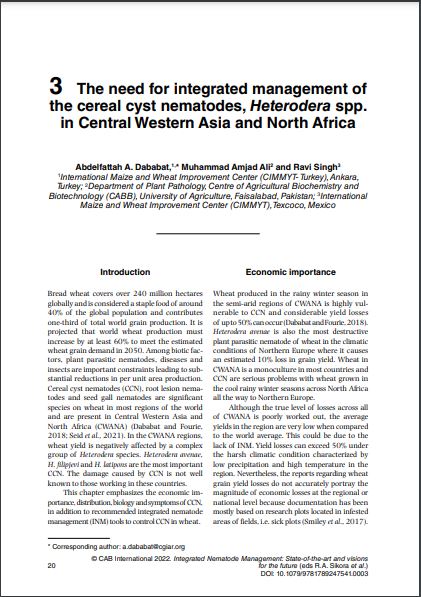 Bread wheat covers over 240 million hectares globally and is considered a staple food of around 40% of the global population and contributes one-third of total world grain production. It is projected that world wheat production must increase by at least 60% to meet the estimated wheat grain demand in 2050. Among biotic factors, plant parasitic nematodes, diseases and insects are important constraints leading to substantial reductions in per unit area production. Cereal cyst nematodes (CCN), root lesion nematodes and seed gall nematodes are significant species on wheat in most regions of the world and are present in the Central Western Asia and North Africa (CWANA) (Dababat and Fourie, 2018; Seid et al., 2021). In the CWANA regions, wheat yield is negatively affected by a complex group of Heterodera species. Heterodera avenae, H. filipjevi and H. latipons are the most important CCN. The damage caused by CCN is not well known to those working in these countries. This chapter emphasizes the economic importance, distribution, biology, symptoms of CCN in addition to recommended integrated nematode management (INM) tools to control CCN in wheat.