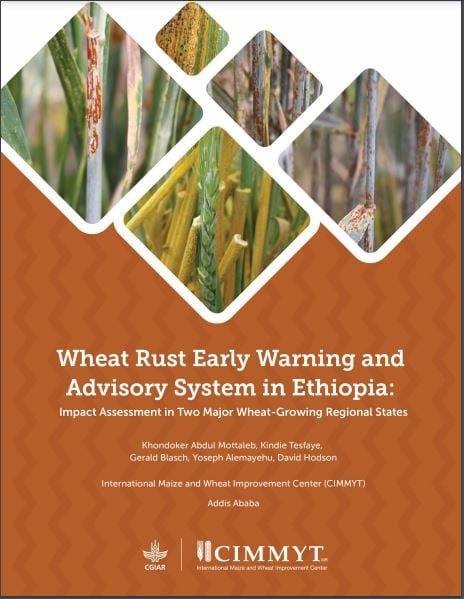 In Ethiopia there are two cropping seasons: meher (May–September) and belg (February–April) The meher cropping season is the main season that produces more than three-quarters of the nation’s total cereal output (USDA-FAS, 2008). Although some wheat is produced in the belg season, most is produced in the meherseason, and wheat rust is a major problem during thisseason. Because of the severity of the problem, the rust early warning and advisory service (EWAS) was started as a pilot in 2015 and transitioned into a more operational system in 2017. To assess the impacts of the EWAS, we collected information directly from the intended clients, i.e., wheat farmers, using a structured questionnaire. The questionnaire was developed and pretested during September and October 2020. The survey questionnaire can be found in Annexure A. In addition, we conducted an opinion survey of agricultural extension agents using a simple questionnaire (Annexure B) and conducted targeted focused group discussions (FGDs) using structured questions (Annexure C), mainly to examine the opinions of the agriculture extension officers and officers at the Federal and Regional Bureaus of Agriculture on the usefulness of the EWAS. Finally, during November and December 2020, we deployed our trained enumerators to collect information from nine districts in the Amhara region: Basoliben, Motta, Wonberima, Burie, Lay Gaint, Misrak Estie, Mekiet, Wadila, and Debay Telatgin; and eight districts from the Oromia region: Arsi Robe, Hitosa, Gedeb Assosa, Dodola, Sinana, Agarfa, Ginir and Golocha. The selected districts are all important wheat-producing districts in Ethiopia. Historically, the Amhara region is more prone to yellow rust outbreaks, while the Oromia region is prone to outbreaks of both stem rust and yellow rust. Oromia represents a high-potential wheat-production area, with probably stronger connections than Amhara to research, extension, and inputs. Amhara is also an important wheat production area, but probably has weaker connections to services and inputs. The survey we deployed thus provides us with an opportunity to examine the relative importance of wheat yellow rust and stem rust in Ethiopia and to compare contrasting wheat production systems. Based on the sampling frame, the initial target was to interview 76 farmers from each district, resulting in a total of 1,275 farmers from 17 districts. However, at the end of our survey, we had collected information from about 1,017 farmers.