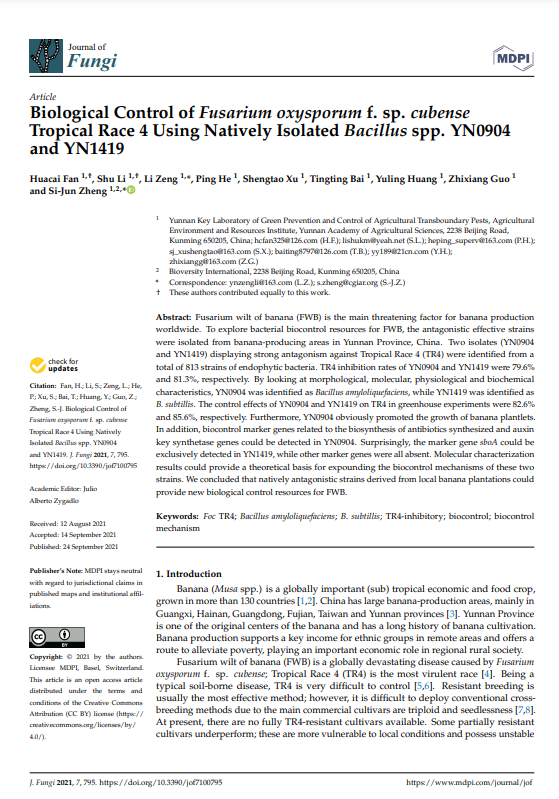 Fusarium wilt of banana (FWB) is the main threatening factor for banana production worldwide. To explore bacterial biocontrol resources for FWB, the antagonistic effective strains were isolated from banana-producing areas in Yunnan Province, China. Two isolates (YN0904 and YN1419) displaying strong antagonism against Tropical Race 4 (TR4) were identified from a total of
813 strains of endophytic bacteria.

TR4 inhibition rates of YN0904 and YN1419 were 79.6% and 81.3%, respectively. By looking at morphological, molecular, physiological and biochemical charac teristics, YN0904 was identified as Bacillus myloliquefaciens, while YN1419 was identified as as B. subtillis. The control effects of YN0904 and YN1419 on TR4 in greenhouse experiments were 82.6% and 85.6%, respectively. Furthermore, YN0904 obviously promoted the growth of banana plantlets. In addition, biocontrol marker genes related to the biosynthesis of antibiotics synthesized and auxin key synthetase genes could be detected in YN0904. Surprisingly, the marker gene sboA could be exclusively detected in YN1419, while other marker genes were all absent. Molecular characteriza tion results could provide a theoretical basis for expounding the biocontrol mechanisms of these two strains. We concluded that natively antagonistic strains derived from local banana plantations could provide new biological control resources for FWB.