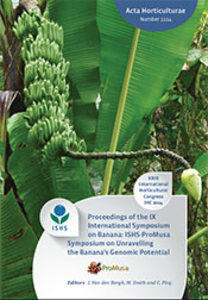 Biological control agents against Fusarium wilt of banana
Bubici, G.; Kaushal, M.; Prigigallo, M.I.; Gómez-Lama Cabanás, C.; Mercado-Blanco, J.
In the last century, the banana crop and industry experienced dramatic losses due to an epidemic of Fusarium wilt of banana (FWB), caused by Fusarium oxysporum f.sp. cubense (Foc) race 1. An even more dramatic menace is now feared due to the spread of Foc tropical race 4. Plant genetic resistance is generally considered as the most plausible strategy for controlling effectively such a devastating disease, as occurred for the first round of FWB epidemic. Nevertheless, with at least 182 articles published since 1970, biological control represents a large body of knowledge on FWB. Remarkably, many studies deal with biological control agents (BCAs) that reached the field-testing stage and even refer to high effectiveness. Some selected BCAs have been repeatedly assayed in independent trials, suggesting their promising value. Overall under field conditions, FWB has been controlled up to 79% by using Pseudomonas spp. strains, and up to 70% by several endophytes and Trichoderma spp. strains. Lower biocontrol efficacy (42–55%) has been obtained with arbuscular mycorrhizal fungi, Bacillus spp., and non-pathogenic Fusarium strains. Studies on Streptomyces spp. have been mostly limited to in vitro conditions so far, with very few pot-experiments, and none conducted in the field. The BCAs have been applied with diverse procedures (e.g., spore suspension, organic amendments, bioformulations, etc.) and at different stages of plant development (i.e., in vitro, nursery, at transplanting, post-transplanting), but there has been no evidence for a protocol better than another. Nonetheless, new bioformulation technologies (e.g., nanotechnology, formulation of microbial consortia and/or their metabolites, etc.) and tailor-made consortia of microbial strains should be encouraged. In conclusion, the literature offers many examples of promising BCAs, suggesting that biocontrol can greatly contribute to limit the damage caused by FWB. More efforts should be done to further validate the currently available outcomes, to deepen the knowledge on the most valuable BCAs, and to improve their efficacy by setting up effective formulations, application protocols, and integrated strategies.
Open Access Journal