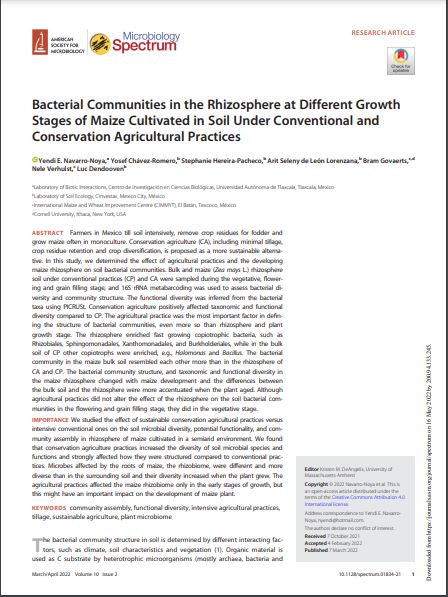 Farmers in Mexico till soil intensively, remove crop residues for fodder and grow maize often in monoculture. Conservation agriculture (CA), including minimal tillage, crop residue retention and crop diversification, is proposed as a more sustainable alternative. In this study, we determined the effect of agricultural practices and the developing maize rhizosphere on soil bacterial communities. Bulk and maize (Zea mays L.) rhizosphere soil under conventional practices (CP) and CA were sampled during the vegetative, flowering and grain filling stage, and 16S rRNA metabarcoding was used to assess bacterial diversity and community structure. The functional diversity was inferred from the bacterial taxa using PICRUSt. Conservation agriculture positively affected taxonomic and functional diversity compared to CP. The agricultural practice was the most important factor in defining the structure of bacterial communities, even more so than rhizosphere and plant growth stage. The rhizosphere enriched fast growing copiotrophic bacteria, such as Rhizobiales, Sphingomonadales, Xanthomonadales, and Burkholderiales, while in the bulk soil of CP other copiotrophs were enriched, e.g., Halomonas and Bacillus. The bacterial community in the maize bulk soil resembled each other more than in the rhizosphere of CA and CP. The bacterial community structure, and taxonomic and functional diversity in the maize rhizosphere changed with maize development and the differences between the bulk soil and the rhizosphere were more accentuated when the plant aged. Although agricultural practices did not alter the effect of the rhizosphere on the soil bacterial communities in the flowering and grain filling stage, they did in the vegetative stage.