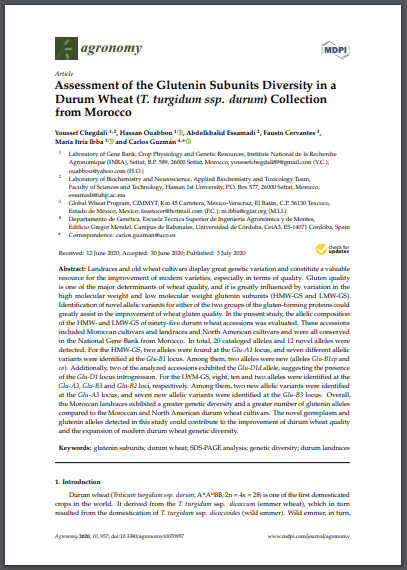 Landraces and old wheat cultivars display great genetic variation and constitute a valuable resource for the improvement of modern varieties, especially in terms of quality. Gluten quality is one of the major determinants of wheat quality, and it is greatly influenced by variation in the high molecular weight and low molecular weight glutenin subunits (HMW-GS and LMWGS). Identification of novel allelic variants for either of the two groups of the gluten-forming proteins could greatly assist in the improvement of wheat gluten quality. In the present study, the allelic composition of the HMW- and LMW-GS of ninety-five durum wheat accessions was evaluated. These accessions included Moroccan cultivars and landraces and North American cultivars and were all conserved in the National Gene Bank from Morocco. In total, 20 cataloged alleles and 12 novel alleles were detected. For the HMW-GS, two alleles were found at the Glu-A1 locus, and seven different allelic variants were identified at the Glu-B1 locus. Among them, two alleles were new (alleles Glu-B1cp and co). Additionally, two of the analyzed accessions exhibited the Glu-D1d allele, suggesting the presence of the Glu-D1 locus introgression. For the LWM-GS, eight, ten and two alleles were identified at the Glu-A3, Glu-B3 and Glu-B2 loci, respectively. Among them, two new allelic variants were identified at the Glu-A3 locus, and seven new allelic variants were identified at the Glu-B3 locus. Overall, the Moroccan landraces exhibited a greater genetic diversity and a greater number of glutenin alleles compared to the Moroccan and North American durum wheat cultivars. The novel germplasm and glutenin alleles detected in this study could contribute to the improvement of durum wheat quality and the expansion of modern durum wheat genetic diversity.