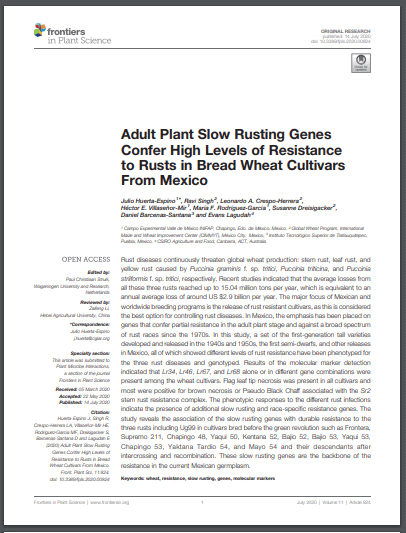 Rust diseases continuously threaten global wheat production: stem rust, leaf rust, and yellow rust caused by Puccinia graminis f. sp. tritici, Puccinia triticina, and Puccinia striiformis f. sp. tritici, respectively. Recent studies indicated that the average losses from all these three rusts reached up to 15.04 million tons per year, which is equivalent to an annual average loss of around US $2.9 billion per year. The major focus of Mexican and worldwide breeding programs is the release of rust resistant cultivars, as this is considered the best option for controlling rust diseases. In Mexico, the emphasis has been placed on genes that confer partial resistance in the adult plant stage and against a broad spectrum of rust races since the 1970s. In this study, a set of the first-generation tall varieties developed and released in the 1940s and 1950s, the first semi-dwarfs, and other releases in Mexico, all of which showed different levels of rust resistance have been phenotyped for the three rust diseases and genotyped. Results of the molecular marker detection indicated that Lr34, Lr46, Lr67, and Lr68 alone or in different gene combinations were present among the wheat cultivars. Flag leaf tip necrosis was present in all cultivars and most were positive for brown necrosis or Pseudo Black Chaff associated with the Sr2 stem rust resistance complex. The phenotypic responses to the different rust infections indicate the presence of additional slow rusting and race-specific resistance genes. The study reveals the association of the slow rusting genes with durable resistance to the three rusts including Ug99 in cultivars bred before the green revolution such as Frontera, Supremo 211, Chapingo 48, Yaqui 50, Kentana 52, Bajio 52, Bajio 53, Yaqui 53, Chapingo 53, Yaktana Tardio 54, and Mayo 54 and their descendants after intercrossing and recombination. These slow rusting genes are the backbone of the resistance in the current Mexican germplasm.