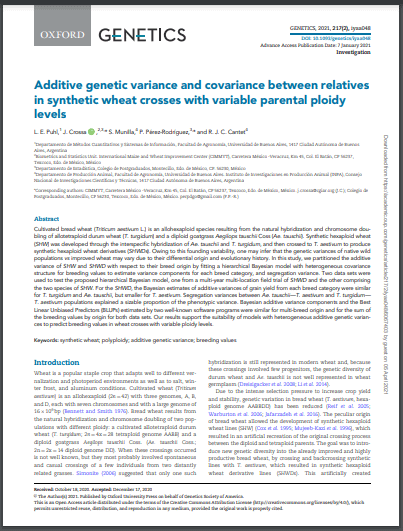 Cultivated bread wheat (Triticum aestivum L.) is an allohexaploid species resulting from the natural hybridization and chromosome doubling of allotetraploid durum wheat (T. turgidum) and a diploid goatgrass Aegilops tauschii Coss (Ae. tauschii). Synthetic hexaploid wheat (SHW) was developed through the interspecific hybridization of Ae. tauschii and T. turgidum, and then crossed to T. aestivum to produce synthetic hexaploid wheat derivatives (SHWDs). Owing to this founding variability, one may infer that the genetic variances of native wild populations vs improved wheat may vary due to their differential origin and evolutionary history. In this study, we partitioned the additive variance of SHW and SHWD with respect to their breed origin by fitting a hierarchical Bayesian model with heterogeneous covariance structure for breeding values to estimate variance components for each breed category, and segregation variance. Two data sets were used to test the proposed hierarchical Bayesian model, one from a multi-year multi-location field trial of SHWD and the other comprising the two species of SHW. For the SHWD, the Bayesian estimates of additive variances of grain yield from each breed category were similar for T. turgidum and Ae. tauschii, but smaller for T. aestivum. Segregation variances between Ae. tauschii-T. aestivum and T. turgidum-T. aestivum populations explained a sizable proportion of the phenotypic variance. Bayesian additive variance components and the Best Linear Unbiased Predictors (BLUPs) estimated by two well-known software programs were similar for multi-breed origin and for the sum of the breeding values by origin for both data sets. Our results support the suitability of models with heterogeneous additive genetic variances to predict breeding values in wheat crosses with variable ploidy levels.