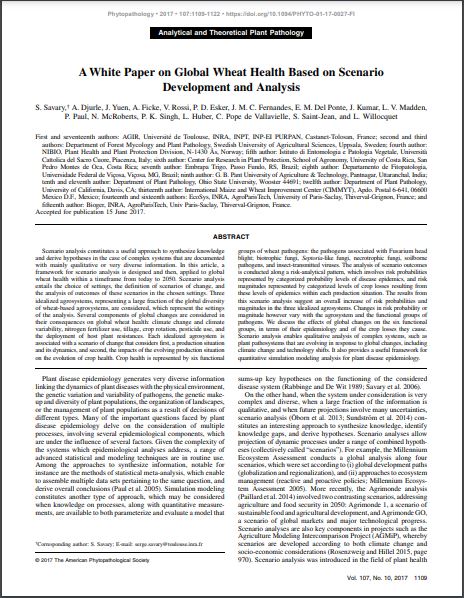 Scenario analysis constitutes a useful approach to synthesize knowledge and derive hypotheses in the case of complex systems that are documented with mainly qualitative or very diverse information. In this article, a framework for scenario analysis is designed and then, applied to global wheat health within a timeframe from today to 2050. Scenario analysis entails the choice of settings, the definition of scenarios of change, and the analysis of outcomes of these scenarios in the chosen settings. Three idealized agrosystems, representing a large fraction of the global diversity of wheat-based agrosystems, are considered, which represent the settings of the analysis. Several components of global changes are considered in their consequences on global wheat health: climate change and climate variability, nitrogen fertilizer use, tillage, crop rotation, pesticide use, and the deployment of host plant resistances. Each idealized agrosystem is associated with a scenario of change that considers first, a production situation and its dynamics, and second, the impacts of the evolving production situation on the evolution of crop health. Crop health is represented by six functional groups of wheat pathogens: the pathogens associated with Fusarium head blight; biotrophic fungi, Septoria-like fungi, necrotrophic fungi, soilborne pathogens, and insect-transmitted viruses. The analysis of scenario outcomes is conducted along a risk-analytical pattern, which involves risk probabilities represented by categorized probability levels of disease epidemics, and risk magnitudes represented by categorized levels of crop losses resulting from these levels of epidemics within each production situation. The results from this scenario analysis suggest an overall increase of risk probabilities and magnitudes in the three idealized agrosystems. Changes in risk probability or magnitude however vary with the agrosystem and the functional groups of pathogens. We discuss the effects of global changes on the six functional groups, in terms of their epidemiology and of the crop losses they cause. Scenario analysis enables qualitative analysis of complex systems, such as plant pathosystems that are evolving in response to global changes, including climate change and technology shifts. It also provides a useful framework for quantitative simulation modeling analysis for plant disease epidemiology.