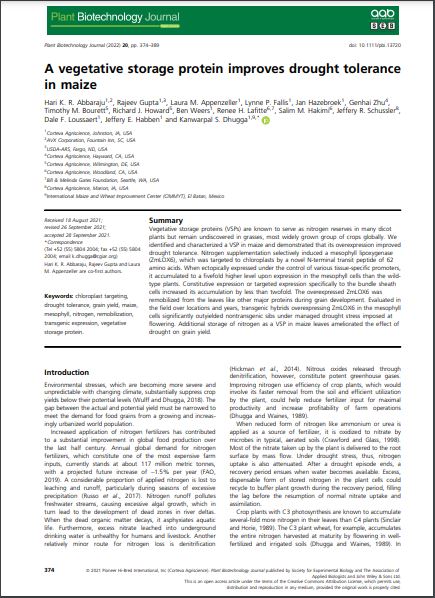 Vegetative storage proteins (VSPs) are known to serve as nitrogen reserves in many dicot plants but remain undiscovered in grasses, most widely grown group of crops globally. We identified and characterized a VSP in maize and demonstrated that its overexpression improved drought tolerance. Nitrogen supplementation selectively induced a mesophyll lipoxygenase (ZmLOX6), which was targeted to chloroplasts by a novel N-terminal transit peptide of 62 amino acids. When ectopically expressed under the control of various tissue-specific promoters, it accumulated to a fivefold higher level upon expression in the mesophyll cells than the wild-type plants. Constitutive expression or targeted expression specifically to the bundle sheath cells increased its accumulation by less than twofold. The overexpressed ZmLOX6 was remobilized from the leaves like other major proteins during grain development. Evaluated in the field over locations and years, transgenic hybrids overexpressing ZmLOX6 in the mesophyll cells significantly outyielded nontransgenic sibs under managed drought stress imposed at flowering. Additional storage of nitrogen as a VSP in maize leaves ameliorated the effect of drought on grain yield.