A system dynamics model for pests and natural enemies interactions 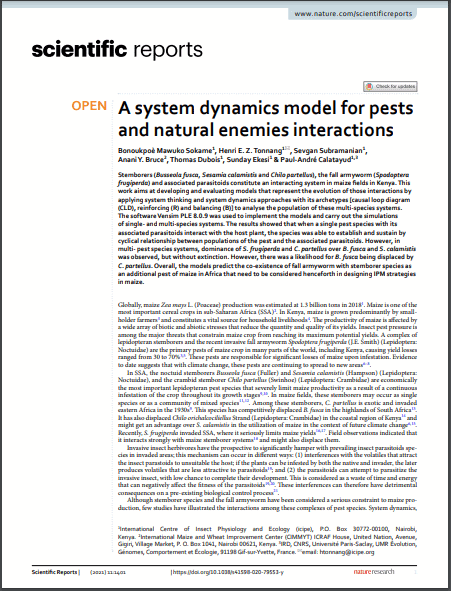 Stemborers (Busseola fusca, Sesamia calamistis and Chilo partellus), the fall armyworm (Spodoptera frugiperda) and associated parasitoids constitute an interacting system in maize fields in Kenya. This work aims at developing and evaluating models that represent the evolution of those interactions by applying system thinking and system dynamics approaches with its archetypes [causal loop diagram (CLD), reinforcing (R) and balancing (B)] to analyse the population of these multi-species systems. The software Vensim PLE 8.0.9 was used to implement the models and carry out the simulations of single- and multi-species systems. The results showed that when a single pest species with its associated parasitoids interact with the host plant, the species was able to establish and sustain by cyclical relationship between populations of the pest and the associated parasitoids. However, in multi- pest species systems, dominance of S. frugiperda and C. partellus over B. fusca and S. calamistis was observed, but without extinction. However, there was a likelihood for B. fusca being displaced by C. partellus. Overall, the models predict the co-existence of fall armyworm with stemborer species as an additional pest of maize in Africa that need to be considered henceforth in designing IPM strategies in maize.