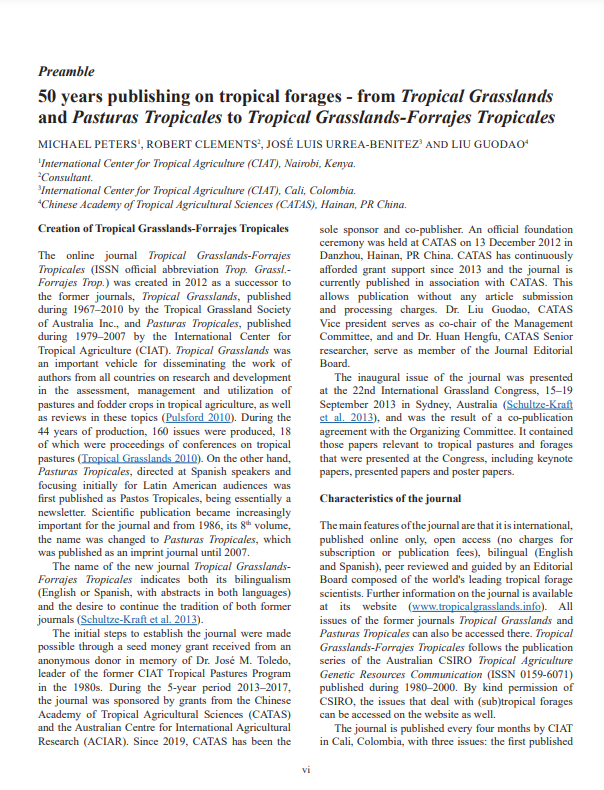 During the 44 years of production, 160 issues were produced, 18 of which were proceedings of conferences on tropical pastures (Tropical Grasslands 2010). On the other hand, Pasturas Tropicales, directed at Spanish speakers and focusing initially for Latin American audiences was first published as Pastos Tropicales, being essentially a newsletter. Scientific publication became increasingly
important for the journal and from 1986, its 8th volume, the name was changed to Pasturas Tropicales, which was published as an imprint journal until 2007.

The name of the new journal Tropical GrasslandsForrajes Tropicales indicates both its bilingualism
(English or Spanish, with abstracts in both languages) and the desire to continue the tradition of both former journals (Schultze-Kraft et al. 2013).

The initial steps to establish the journal were made possible through a seed money grant received from an anonymous donor in memory of Dr. José M. Toledo, leader of the former CIAT Tropical Pastures Program in the 1980s. During the 5-year period 2013‒2017, the journal was sponsored by grants from the Chinese Academy of Tropical Agricultural Sciences (CATAS) and the Australian Centre for International Agricultural Research (ACIAR). Since 2019, CATAS has been the sole sponsor and co-publisher. An official foundation ceremony was held at CATAS on 13 December 2012 in Danzhou, Hainan, PR China. CATAS has continuously afforded grant support since 2013 and the journal is currently published in association with CATAS. This allows publication without any article submission and processing charges. Dr. Liu Guodao, CATAS Vice president serves as co-chair of the Management Committee, and and Dr. Huan Hengfu, CATAS Senior researcher, serve as member of the Journal Editorial
Board.

The inaugural issue of the journal was presented at the 22nd International Grassland Congress, 15‒19
September 2013 in Sydney, Australia (Schultze-Kraft et al. 2013), and was the result of a co-publication agreement with the Organizing Committee. It contained those papers relevant to tropical pastures and forages that were presented at the Congress, including keynote papers, presented papers and poster papers.