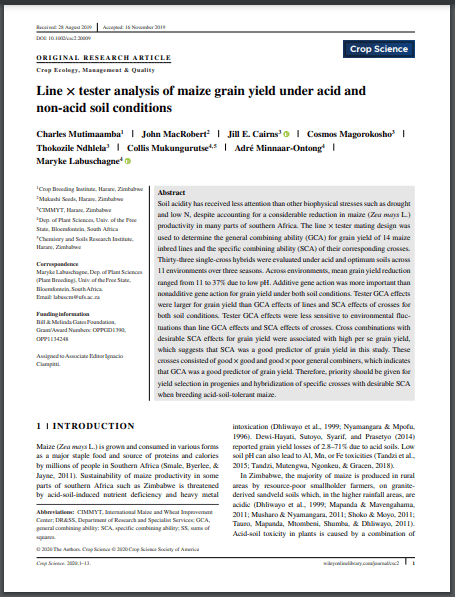 Soil acidity has received less attention than other biophysical stresses such as drought and low N, despite accounting for a considerable reduction in maize (Zea mays L.) productivity in many parts of southern Africa. The line × tester mating design was used to determine the general combining ability (GCA) for grain yield of 14 maize inbred lines and the specific combining ability (SCA) of their corresponding crosses. Thirty‐three single‐cross hybrids were evaluated under acid and optimum soils across 11 environments over three seasons. Across environments, mean grain yield reduction ranged from 11 to 37% due to low pH. Additive gene action was more important than nonadditive gene action for grain yield under both soil conditions. Tester GCA effects were larger for grain yield than GCA effects of lines and SCA effects of crosses for both soil conditions. Tester GCA effects were less sensitive to environmental fluctuations than line GCA effects and SCA effects of crosses. Cross combinations with desirable SCA effects for grain yield were associated with high per se grain yield, which suggests that SCA was a good predictor of grain yield in this study. These crosses consisted of good × good and good × poor general combiners, which indicates that GCA was a good predictor of grain yield. Therefore, priority should be given for yield selection in progenies and hybridization of specific crosses with desirable SCA when breeding acid‐soil‐tolerant maize.