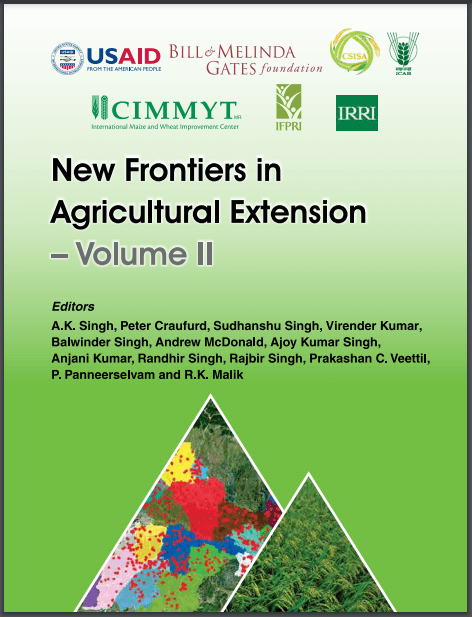 Cereal-based cropping systems are vital to the food security in South Asia as population increases are high in this area- a cause of concern for the livelihood of the most densely populated region of world. The year 1966 saw the start of Green Revolution (GR) based on new high yielding fertilizer responsive varieties, which initiated the expansion in food production. It was a significant milestone in the fight against the food shortages of late 1960s and 1970s. We are proud of what we have achieved In rice-wheat cropping system (RWCS) and in rice-rice cropping system (RRCS) so far, but this success is not uniform across the region. Rice has been the center of significance as far as the cropping system productivity is concerned. Now that milestone has to be sustained, especially in view of climate change. Creation of infrastructure for irrigation made the GR easier in Punjab, Haryana and Southern states. By and large the impact of GR in eastern states is small compared to regions with assured irrigation. However, regions of assured irrigation are now facing the second-generation problem of falling water tables, whereas eastern states have lower adoption of new technologies. The agronomic management gaps between stronger North-west and Southern states and weaker Eastern states have remained as such. Furthermore, productivity growth did not result in an increase in earning or wealth by farmers across all states. New technologies require scaling, which is not happening. The focus has to shift from a top-down approach to developing and scaling fanner-led innovative research and their transformation or adaptation of recommended technologies. At a time when yield gaps within and between states arc large, it is important to understand why farmers’ interest (or incentive) does not necessarily align with scientists’ solutions.

The impact of climate change across South Asia, second generation problems in some states, and slow growth in other states are now shaping the research and extension agenda in rice. There has to be a focused attention on setting priorities to tackle these problems. The lesson learnt is that the major breakthrough does not come from the top-down approach and through isolated approaches based on commodity crops. Hence, there is a need to shift the perspective to systems and build on the lessons learnt so far, and requirement is of new initiatives in the Conn of big data analytics on — what works, what does not work and why. The priority setting should now be based on a strong feedback mechanism, backward integration, bottom-up approach, big data generation, data analytics and its digitization and evidence-based scaling approach. The KVK system, which operates at district level, needs to: (i) up-gradeknowledge base of their scientists within their specialization; and (ii) equip them with the skills in digital data collection and analytics, which will become a key part of their activities in futurc. If modem varieties powered the GR, crop and system management are required to play a greater role in the second GR. Yield gaps can be handled effectively only if these become evident through a sound data-base and the prioritization of rapid monitoring, evaluation, and learning (ME&L) processes.

This publication reveals how this can be achieved. This publication brings together the status of technology adoption patterns of rice-based technologies across eight states—Andhra Pradesh, Bihar, Chhattisgarh, Haryana, Odisha, Punjab, Uttar Pradesh (mostly Eastern Uttar Pradesh) and West Bengal. Such data sets should be regularly gathered through the well-connected KVK system and used at district, state and national levels for developing of research and extension plans. Since such data sets need to be more granular and detail oriented, ATARIs are the best institutions to provide a base line and monitor the progress in the adoption of technologies to narrow the yield gaps in crops and cropping systems. The research institutions and state agricultural universities can use this information in developing the technical programs and then expand in a broader farming system framework. In the long run, such data sets can be used to understand adoption patterns and making strategic decisions on seasonal planning by the department of agriculture (DoA) in states. Eventually it could be a logical next step towards big data and machine learning as part of new frontiers in agricultural extension.

The primary objective of the publication New Frontiers in Agricultural Extension, Volume II, is to understand the opportunities to align the rice-based cropping system research and extension from the ground-up rather than top-down approach. I hope, with greater need for a strong data base used in this publication, the prospects of setting evidence-based research and extension priorities and ME&L will improve efficiency in National Agricultural Research. Education and Extension System.