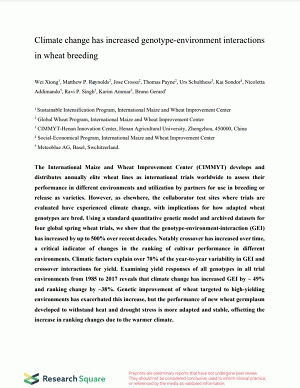 Climate change has increased genotype-environment interactions in wheat breeding
The International Maize and Wheat Improvement Center (CIMMYT) develops and distributes annually elite wheat lines as international trials worldwide to assess their performance in different environments and utilization by partners for use in breeding or release as varieties. However, as elsewhere, the collaborator test sites where trials are evaluated have experienced climate change, with implications for how adapted wheat genotypes are bred. Using a standard quantitative genetic model and archived datasets for four global spring wheat trials, we show that the genotype-environment-interaction (GEI) has increased by up to 500% over recent decades. Notably crossover has increased over time, a critical indicator of changes in the ranking of cultivar performance in different environments. Climatic factors explain over 70% of the year-to-year variability in GEI and crossover interactions for yield. Examining yield responses of all genotypes in all trial environments from 1985 to 2017 reveals that climate change has increased GEI by ~ 49% and ranking change by ~38%. Genetic improvement of wheat targeted to high-yielding environments has exacerbated this increase, but the performance of new wheat germplasm developed to withstand heat and drought stress is more adapted and stable, offsetting the increase in ranking changes due to the warmer climate.