Wildlife markets in the pandemic: Prohibit or preserve them? Ban or promote them? 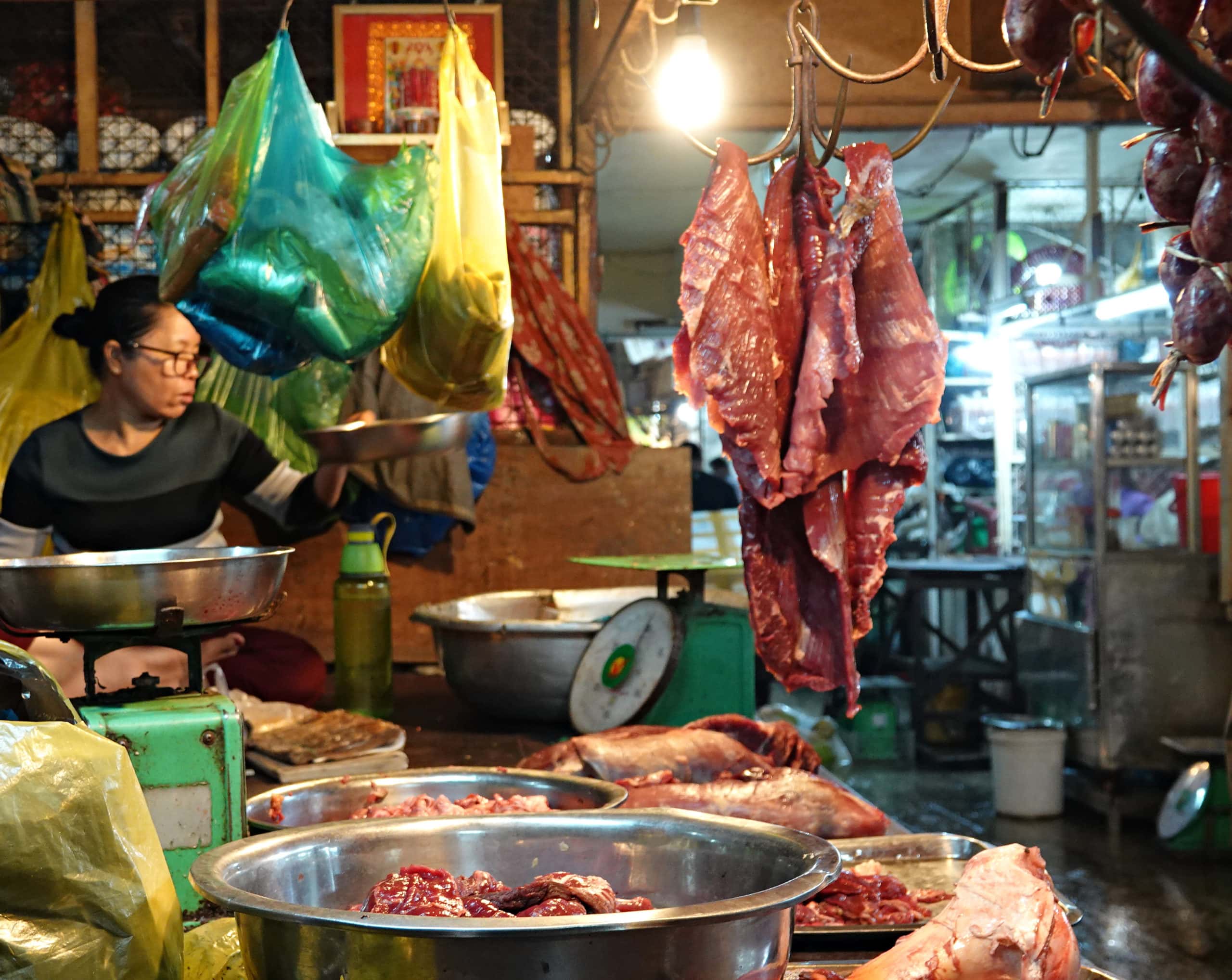 ILRI and UN experts say
preserve and protect
the world’s ‘informal markets’
AND
invest and enhance these markets,
which provide billions of people
with food and incomes.

Around 60% of human infectious diseases are transmitted by animals. These diseases are known as ‘zoonoses’. While it is often viruses that cause zoonoses, such as Ebola, the human immunodeficiency virus/acquired immunodeficiency syndrome (HIV/AIDS), Middle East respiratory syndrome (MERS), severe acute respiratory syndrome (SARS), highly pathogenic avian influenza (HPAI, or bird flu) and Zika fever, bacteria, parasites, fungi and degenerate proteins (so-called prions) from animals can also cause diseases in humans. Almost three-quarters of the infectious diseases transmitted to people from the animal kingdom come from wild animals.

In the face of the COVID-19 pandemic, caused by the SARS-coronavirus-2 (SARS-CoV-2), which is suspected to have originated in a bat or other wild animal, calls are increasing for bans on consuming game meat or selling it in the traditional fresh markets ubiquitous in low- and middle-income countries, also known as ‘informal’ or ‘wet’ markets. But it is not yet clear where the spillover occurred, which is one argument against blaming the so-called ‘wet markets’.

So what is the right response to these informal markets?

As detailed in a recent report on preventing the next pandemic jointly published last July by the International Livestock Research Institute (ILRI) and the United Nations Environment Programme (UNEP), eating game, or ‘bush’, meat is popular with many people and is common in poor countries, whose populations cannot afford to buy beef, lamb, pig, goat or chicken meat. In these countries, meat harvested from wild animals, unlike high-input livestock farming, requires no investments other than hunting. And this meat provides scarce proteins and micronutrients important for human development and health. It is also an important source of income for hunters and market sellers. And consumers consider game meat to be particularly fresh, natural and—relative to meat from farm animals—affordable. Wildlife body parts are also sold for decorative, medicinal and other commercial purposes. In addition, some communities consider hunting wild animals to be a status symbol. Wild animals are also captured to be sold live, for use as pets, for zoo collections and for medical experiments.

The ILRI-UNEP report cites estimates that around six million tons of game meat are hunted annually in Latin America and Africa. A recent survey of nearly 8,000 rural households in 24 countries in Africa, Latin America and Asia showed that around 39% of them hunted wild animals and almost all of them consumed wild meat. In Central Africa, the consumption of bush meat, at 48 grams per person per day, is even higher than the meat consumption of farm animals (34 grams). Increasing population growth and increasing prosperity will significantly increase the demand for animal proteins, and thus also for game meat, in the future.

Unfortunately, the rural communities of poor countries have been provided with few incentives to protect wildlife and their ecosystems. Although increasing chicken and pig farms are supplying increasing amounts of meat in many countries, this has done little to relieve pressure on wildlife populations and their habitats. Many rural poor communities continue to include game meat in their poor, largely starchy, diets and many urban elites continue to view eating game meat as a status symbol they are reluctant to forgo.

In Asia and Africa, wild animals as well as game meat are often sold alongside other farm animals and farm animal meats in the informal markets that most of their populations frequent. Lack of infrastructure and regulation in these informal markets mixing domesticated and wild animals can lead to hygiene deficits that make them potential breeding grounds for new zoonoses.

SARS-CoV-2 and other new pathogens—viruses in particular but also bacteria and disease-causing microbes of all kinds that carry resistance to antibiotics or antimicrobial drug residues—have always been associated with traditional markets, where live farm and wild animals and their products are traded in confined spaces with minimum oversight and safety standards. However, there are studies that refute the idea that coronaviruses have ‘jumped’ from animals to humans mainly or solely in these markets. Overall, however, experts agree that informal markets harbour health risks, especially when live or slaughtered livestock and wild animals are traded under poor hygienic conditions.

But banning such markets outright is unfeasible as they are ubiquitous across the developing world. And, in any case, outright bans of informal markets would be disastrous to the food, nutrition and economic welfare of billions of people. A more realistic and judicious solution is to improve the conditions of these markets so that their zoonotic and other health risks are minimized. This is the position taken in a recent report on stopping the next pandemic jointly published last July by the International Livestock Research Institute (ILRI) and the United Nations Environment Programme (UNEP). Informal markets should be preserved, say the authors of the report, but continuously improved.

Essential for food security
For billions of people, the consumption of meat, milk, eggs and fish is an important source of high-quality protein, vitamins and trace elements that guarantee people’s health and productivity. Buying these nutritionally rich animal-source foods in supermarkets is beyond the means of most people in most poorer countries, who must make such purchases in lower-priced informal markets. Furthermore, these traditional markets remain indispensable to the incomes as well as nutrition of small-scale farmers, food processors and traders, especially women.

The traditional, informal markets of developing countries offer fresh animal and vegetable products, many also offer live animals such as poultry, fish, shellfish and, in some cases, wild animals. The products typically come from the immediate vicinity or region but are also imported.

A challenge to enhancing the safety of these markets is their very informal nature, which makes it difficult to enhance food safety by enforcing minimum safety standards, regulations and controls, or even to provide permits, to tax businesses or to train the market vendors in food hygiene and related matters. Furthermore, the optimal food safety frameworks to be applied will be diverse so as to suit diverse contexts and countries.

As mentioned, stricter regulation of the sale of food in these markets has proven difficult and impractical in the past, especially in countries where there is little effective monitoring. In general, there is a risk that such bans will lead only to the formation of black markets, which only exacerbate the problems to be solved.

Because informal food markets offer so many advantages to the poor—among them low food prices; access to local, regional and fresh foods; income for many women and youth as well as men; and attractions for tourists—these benefits need to be carefully weighed against the health risks for consumers on a case-by-case basis. This balancing is particularly important in the midst of a zoonotic pandemic.

China is taking rigorous measures
After the first COVID-19 outbreak in a traditional fresh food market in Wuhan in late 2019, the Chinese government closed the market immediately. A month later, on 26 January 2020, the government banned the trade and consumption of wild animals in fresh markets. The slaughter of farm animals was also prohibited in informal urban markets. Although this regulation is difficult to implement in rural areas, violations have been severely punished with stricter controls. Vietnam also stopped all imports of wild animals in mid-July 2020 and ordered the closure of illegal wildlife markets.

While imposing these rigorous measures is a logical attempt to reduce the spread of COVID-19, they inevitably cause bottlenecks in food supplies for poorer consumers. As a result of the lockdowns implemented to try to stem the pandemic, many people in developing and emerging countries, like those in industrialized economies, have lost their jobs, but most of the former have also lost their incomes and have no social security or health insurance. Every day without work exacerbates both their livelihood and their food supply problems. Among many of these people, game meat is their cheapest source of protein.

Maintain informal fresh markets and gradually reform them
The ongoing COVID-19 crisis is expected increase world hunger and poverty. The World Food Program estimates that by the end of 2020, around a quarter of a billion people will be hungry. ILRI and UNEP make a compelling case for private as well as public sectors to maintain informal fresh markets while making greater investments in them to enhance their conditions. Water, electricity, waste disposal and other basic infrastructure must be provided and food retailers trained in disinfection, good hygiene, use of protective equipment, etc. Food monitoring as a whole needs to be strengthened and economic incentives could encourage consumers to buy only from certified dealers.

Zoonotic outbreaks arising in the informal as well as formal sectors must be investigated in an interdisciplinary ‘One Health’ manner—e.g., by medical doctors, veterinarians, ecologists, geologists, sociologists and economists working together. Slaughterhouses in developing countries could, for example, serve as intervention points for the monitoring of infectious diseases, where slaughter staff and live and dead animals could be regularly tested for diseases. Routine monitoring of animal watering offers an even earlier opportunity to detect pathogens that could be transmitted from animals to people. In regional and supra-regional cooperation, the transfer of knowledge from Europe to Africa should be intensified in the area of risk assessment in food hygiene, the development of laboratory-independent rapid diagnostics and the monitoring of pathogens with pandemic potential at their source.

For more than two decades, ILRI has been investigating zoonotic diseases and promoting One Health approaches—uniting medical, veterinary and environmental expertise—to reduce them.

ILRI has also managed to elevate food safety in poorer countries from a ‘Cinderella issue’ to a major one in global development.

Meanwhile UNEP, which is also headquartered in Nairobi, has focused on addressing the most urgent global issues in environmental health and safety and  with a keen understanding of developing-country issues.
—Kristina Roesel, ILRI biomedical/veterinary scientist

With this new ILRI-UNEP collaborative work to prevent zoonotic pandemics in future, and with the recent creation of a One Health Research, Education and Outreach Centre for Africa at ILRI’s campus in Nairobi, Kenya, financed by Germany’s Federal Ministry for Economic Cooperation and Development (BMZ), this multi-disciplinary, multi-sector, multi-institutional ‘One Health’ solution promises to become more focused, more intensive and more global in future.
—Dieter Schillinger, ILRI deputy director general for biosciences

Read the ILRI-UNEP report: Preventing the next pandemic: Zoonotic diseases and how to break the chain of transmission, Jul 2020.